St. Ursula Academy takes its recycling program to the next level.

Julie Ahrnsen, a junior at St. Ursula Academy in East Walnut Hills and co-president of the Earth Club, always loved the outdoors and being outside. But being at SUA took her passion to another level.

“I didn’t really know any of the environmental issues but taking biology with Mr. Simcoe and other classes made me realize it was a really imperative issue, so I started composting at home a little bit, I think beginning sophomore year realizing that was pretty important and super easy to do,” she says. “I’ve always recycled, but coming to St. Ursula made me realize it was really important.”

That’s why when SUA announced that it was forming a Green Team of students who would help sort trash at lunchtime; she jumped at the opportunity to join. Thanks to assistance from Ahrnsen and other Green Team members, SUA, which has 660 students, has taken its lunch waste down to just two bags a day.

“Just looking at how to live that out more as a community was [an] element,” she says. “I think it’s just a timely issue in a conversation that’s growing a lot and this just seemed like the natural next step.”

Mark Simcoe, who teaches biology and environmental science and is also a moderator for the team, says he saw it as an organic extension of the recycling program the school started years ago.

“Every year it seems like we’re adding on new dimensions of sustainability at the school. In my 11 years here, the recycling program has gotten more and more in depth in terms of what we recycle and where, so this is really the next step we saw. We saw a need for reducing waste in the cafeteria,” he says.

For inspiration, the moderators—Mertens, Simcoe, Joanne Elsbrock and Mary Ragland—visited other schools, such as Sycamore and Loveland, to see how they recycled. The Ursuline Sisters also gave the school a $9,000 grant to help get the program started and other members of the community, including the administration, faculty and Fresh Market, decided to help as well.

What the school has done is introduce more recycling options and composting during lunchtime. To help navigate these new options, roughly 40 students, including Ahrnsen, volunteered to staff the sorting table during lunch two-to-three times a quarter. There, the students help others determine in which bins their trash should go. The categories included recycling (paper and paperboard, aluminum and steel cans, and plastic bottles and jugs), composting (napkins, leftovers/uneaten food and food scraps) and landfill (everything that cannot go into one of the other bins). 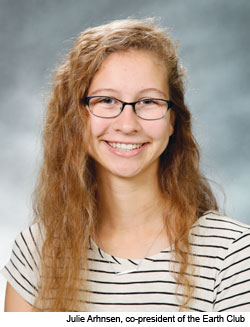 “At the beginning it was a lot harder because people didn’t know where to put things. There were signs of what items could go in what container, so that really helped, but basically if someone put something in the wrong container, you tell them that they put it in the wrong container,” says Ahrnsen. “People would ask why do we compost and why do we recycle and so you just try to educate people because that makes them more likely to do it well and do it right.”

With the success of these changes, SUA has decided to further reduce its waste by introducing additional programs.

Another change the school added last quarter to the program is up-cycling. Empty and clean plastic and Ziploc bags, foil-lined wrappers, and chip and snack bags are being collected for TerraCycle Co. TerraCycle turns this waste into new products, such as bags, and pays the school for the recycled waste.

“Our mentality in doing that was kind of lets not throw all these new things at them at once. Let’s throw the composting in there in the beginning of the year and then, because that was kind of a change, that was a little bit of a shift, adding on another layer as they got used to that,” says Simcoe.

“Most of the stuff that we throw away probably is just packaging, and Ziploc bags and stuff so it’s been amazing just to see the difference that that’s made,” Mertens says. The school predicts that it will be able to take its lunch trash down to one bag per lunch with this added initiative.

SUA’s community has worked hard to find more ways to be green and Ahrnsen hopes that the school can inspire others who are considering recycling or composting.

“This initiative, even though it’s taken a ton of work and requires a lot of effort, it’s something that everyone can really do and even if not at your school you can do it at home. [We’re] just trying to educate people on the issues so that they can then implement it in their lives,” she says. “We’re just doing a little bit and we’re just doing the best we can do. If everyone does that then a lot will be accomplished.”