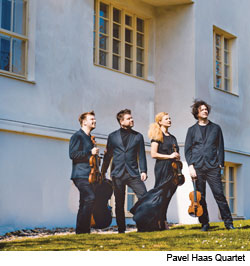 Cincinnati arts organizations ring in spring by keeping busyCorinne Minard We may still be fighting cold weather as we enter spring in the Greater Cincinnati region, but the Tristate’s arts organizations are in full swing. New art exhibits, classical music and riveting theater can be found throughout the months of February and March. Read on for a taste of this spring’s arts opportunities.

The Cincinnati Symphony Orchestra and Cincinnati Pops have filled the coming months with plenty of music. The Pops start February with its final performances of Orchestral Spectacular: Gershwin’s Rhapsody in Blue (Jan. 31- Feb. 2). Pianist Marcus Roberts joins the Pops to play Gershwin’s seminal classic, but attendees will also hear show-stoppers like “Porgy and Bess,” “Cuban Overture” and “American in Paris.”

The following week the CSO is joined by mezzo-soprano Isabel Leonard and pianist Jean-Yves Thibaudet for Play of Light: Ravel’s L’Enfant (Feb. 7-8). The show will be brought to life with projected animations on and around the orchestra that were created in collaboration with the University of Cincinnati’s College-Conservatory of Music.

To end the month, the CSO is going big with a recreation of one of Beethoven’s most legendary concerts. Beethoven Akademie 1808 (Feb. 29-March 1) is a six-hour event with a two-hour dinner break as an intermission. The symphony will be covering eight of Beethoven’s works with the help of several guest artists, including singers and a pianist.

In March, the CSO will celebrate Mozart and Shostakovich. For Manny and Mozart (March 27-28), the symphony will be joined by Emanuel Ax, a Grammy-winning classical pianist.

Memorial Hall will also be  playing host to several classical performances over the coming months. Chamber Music Cincinnati is bringing both Pavel Haas Quartet (March 12) and Murray Perahia (March 17) to the hall.

And for those who enjoy opera, soprano Nicole Cabell (March 27) is performing a solo show, something she rarely does.

The region’s many theater companies are also staying busy this spring, with each group hosting multiple shows.

A highlight includes Playhouse in the Park’s AmericUS (Feb. 1-March 8). Performed by Universes, a multi-cultural performance ensemble, the show will fuse theater, dance, hip-hop, jazz and more for a show that looks at contemporary America.

But there’s plenty more. The Cincinnati Shakespeare Company brings some levity to the season with its performance of Pride & Prejudice (Feb. 28-March 28), Broadway’s Les Misérables (Feb. 11-23) will make a stop at the Aronoff and the Cincinnati Ballet will perform the classic tale of Swan Lake (Feb. 13-16).

Many art exhibits will also be calling the Tristate home this spring.

At the Weston Art Gallery, visitors will be able to see “Pop Supernatural” (Feb. 7-April 5). The exhibit contains three interconnected bodies of work, but the highlight will surely be the enormous carved wooden PEZ dispensers that people will be able to see in the lower galleries.

“Women Breaking Boundaries” (through April 12) only has another month at the Cincinnati Art Museum, so art fans should head over to the museum before it leaves. The exhibit features the work of women artists from around the world in many mediums, and featured artists include Georgia O’Keeffe, Lorna Simpson and Chiyo Mitsuhisa.

The Taft Museum of Art brings in one last exhibit before the end of March to celebrate its home. “Built to Last: The Taft Historic House at 200” (March 27-July 19) will tell the story of its historic house and features a scale model of the house.