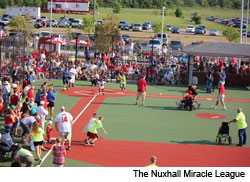 The Joe Nuxhall Miracle League dreams big with a new mini golf courseLiz Engel It’s a phrase forever etched in baseball greatness. In lights, literally, along the side of Great American Ball Park, home of the Cincinnati Reds, is the signature signoff of legendary radio broadcaster and pitcher Joe Nuxhall: “Rounding third and heading for home.”

In Fairfield, those words live on, too, at the namesake Joe Nuxhall Miracle League fields. And when the League debuts its latest project this summer—a first of its kind for kids with special needs—it will be the resonating theme.

The Joe Nuxhall Miracle League is expanding once more, this time with a new, fully accessible 18-hole miniature golf course. And volunteers are also setting their sights on the next big dream.

“That’s what we do. That’s the mindset for all of us. What can we continually do to make this a better place for everyone here, for the families, for the kids?” says Kim Nuxhall, chairman of the Nuxhall Miracle League board of directors and Joe Nuxhall’s son.

The Joe Nuxhall Miracle League debuted in 2012, but it came into vision years before that. Today, there are more than 240 Miracle League organizations across the country; around 2001, the Nuxhalls saw an opportunity to add one here.

The new mini golf course, under construction now, will sit behind the LCPL Taylor Prazynski Memorial Field. Thanks to corporate and community support and various in-kind donations, the League recently expanded the design from nine holes to 18. Skidmore Sales is the course sponsor; Kim Nuxhall says the company wanted to honor employees whose kids have special needs. Other businesses like Ernst Concrete and Apex Construction have also stepped in.

The course will likely open to the public on the weekends—visitors can choose to make a monetary contribution—but each Miracle League athlete, kids and adults alike, will get a putter and a ball. Kim Nuxhall says an organization called May We Help is working to develop an automatic putting device for those who may not be able to hold a club themselves.

The course will be accessed using a special code so they can play any time they want.

“It’s like their own special club,” Kim Nuxhall says.

The overall concept is possibly a first of its kind. While some mini-golf courses may be accessible to a degree, Kim Nuxhall says this is likely the first course in the country specifically designed with those for special needs. That means extra width at each hole, plenty of wide-open space for a wheelchair to maneuver.

Kim Nuxhall has no formal renderings; the course is mostly a vision in his head, but the obstacles will be “cool.” There’s a huge Frisch’s Big Boy, a 22-foot giraffe from Trader’s World and a dinosaur, frog and hippo, too, relics from the former Joe Nuxhall Golf Center that once operated nearby.

But Kim Nuxhall’s favorite hole will be No. 18. That’s where kids can putt through a life-sized bobblehead of his dad, a rendering from age 15 when he became the youngest player in Major League history. The theme on the final green, of course, is “Rounding third and heading for home.”

“It’s just going to be really neat,” Kim Nuxhall says. “That, I think, is going to be fun.”

Joe Nuxhall didn’t live long enough to see his Miracle League’s debut—he passed away in 2007—but his presence is everywhere here. Kim Nuxhall says he’d be “blown away” by what the community has done thus far.

The League just kicked off its seventh season—April 13 marked the “second biggest opening day in the city” for 100 youth players, ages 5-16. An adult league similarly plays on Friday nights.

The next “big, big dream,” Kim Nuxhall says, is a full-size gymnasium. While it’s been talked about for years, it’s closer than ever to reality.

At roughly 18,000 square feet, it will serve as a year-round facility and house Butler County Special Olympics, a place for athletes to play wheelchair rugby, wheelchair basketball and more. He envisions a multi-purpose room with specialized equipment. Maybe another merry-go-round. A climbing wall. “An experience that these kids may not get anywhere else,” he says. And, upstairs, a mini-museum of sorts, filled with his dad’s various memorabilia. Part historical, but equally inspiring.

“We want it to tell the story of dad, but beyond baseball, what really was important to him was giving back to the community,” Kim Nuxhall says.

Kim Nuxhall says it will cost roughly $5 million to make that dream a reality; that includes funds for an endowment for future maintenance and repairs. Once the golf course is complete, finding those funds—whether it be via a corporate donor, private individual, or both—will be the next point of focus.

It may also be Kim Nuxhall’s last go round. Once the gym is complete, “it might be time to sit back a little bit,” he says. The League relies entirely on volunteer help, but when the gym comes online, it might be time to hire a director, he says, someone to take over the day-to-day with his support.

But for now, the course is taking shape. The goal is to debut it in time for this year’s Nuxy Bash, the League’s anniversary celebration, on July 28.

And there’s plenty of excitement about that.