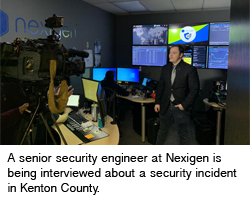 Nexigen grows by keeping up with tech trendsDavid Holthaus Jon Salisbury and J.J. Schaffer met nearly two decades ago when they were both working at the Best Buy in Florence, Kentucky, on the electronics retailer’s tech bench.

They became friends by way of their IT engineering backgrounds, sharing ideas about computing, especially about something known at the time as “utility computing.” Today, that’s called “cloud computing,” the idea of having access to computing resources, storage and power without having to directly manage it.

With a good idea and their entrepreneurial bent, they started a company called Nexigen in 2003.

“It was a great idea that turned into a fantastic industry,” says Chris West, Nexigen’s director of sales and marketing.

However, in 2003, they were a bit ahead of their time on the cloud computing idea, so they began offering managed services to businesses, providing information technology services for companies on a contract basis, saving those businesses the expense and time of hiring their own full-time IT staffs.

Today, Nexigen has grown to 55 employees, 45 of whom work in tech roles. From its base in Newport, Kentucky, Nexigen offers IT services—including managed services and cloud computing—to companies around the Greater Cincinnati region and beyond.

Nexigen is a full-service shop, offering everything from everyday IT support to a full cybersecurity suite.

In the last couple of years, its cybersecurity services have become an important center of growth, West says.

“In the last 12 to 24 months, across all industry segments, information security has become more and more prevalent,” West says.

High-profile data breaches at companies like Equifax, Marriott International and Target exposed the data of tens of millions of their customers and highlighted the risks and liabilities of weak cybersecurity.

“The internet has enabled many more people to reach out and interact with other organizations’ infrastructures,” West says. “So businesses are putting more and more attention on this particular aspect of their business.”

The negative publicity has awakened businesses and other organizations to the need for strong cyber security.

“A lot of organizations don’t realize they have compliance exposures or security issues,” he says.

It’s not something all companies want to staff up for by using their own workforce.

Then there’s the cost of hiring IT staff. “Small businesses often don’t believe they have the budget,” he says. “But we can help them prioritize where to put their resources and it becomes much more manageable.”

The company provides services largely in the health care, manufacturing, retail and financial verticals and has grown largely through word-of-mouth and a referral network, West says.

“We’re basically a customer service company that happens to be good at IT,” he says.