CVG’s history and future is full of resilience and feistiness.

The news coming out of the Cincinnati/Northern Kentucky International Airport (CVG) in the last 18 months is remarkably upbeat. The “de-hubbing” of CVG by Delta Airlines in 2011 was devastating. For members of the Kenton County Airport Board, employees at CVG and the broad public, the airport seemed to be in a downward spiral.

At that moment, October 2011, Candace McGraw was named the new CEO. With a long history of airport management, an incredible focus and a calm demeanor, she and her team set out to stabilize the business, develop a new model for moving forward and change the conversation to convince people that it is OK to be a local airport and not a hub dominated by a single airline. Six years later CVG is a more diversified and complex reality.

On the passenger-service side, the introduction of low-cost carriers Frontier Airlines (2013) and Allegiant Airlines (2014) combined with the recent announcement that Southwest Airlines will begin operating out of CVG in June is certainly one component. “Competition is good,” observes McGraw.

Equally important has been the development of CVG as an internationally renowned cargo handling port. DHL returned to CVG in mid 2009. Since returning, the company has invested $280 million in three expansions, creating a highly automated sort facility that employs over 2,600 people.

In February, Amazon, the online powerhouse that has transformed American retailing, committed to investing $1.49 billion to build a worldwide cargo hub that will initially generate 3,000 jobs.

These cargo operations generate landing fees that broaden the revenue base and lower the cost of passenger tickets. Beyond that, “For a company that is as forward-leaning as Amazon the possibilities are limitless,” says McGraw. “Companies will want to move to the area to be around Amazon. That could change everything.”

A third component of the revitalization effort is the decision of the Kenton County Airport Board to develop a portion of the 7,500 acres of land that they own. In 2014 CVG initiated a systematic evaluation of the property to determine what could be profitably developed and what infrastructure investments would be required. Today four developments are underway. Again, this diversifies the financial base of the airport strengthens local job creation.

By the late 1930s it was clear that Lunken Airport, stuck in a valley that flooded and was hemmed in by hills, could not be the major regional airport of the future.

Stanley Rowe, the president of Shepard Elevator and a prominent Cincinnati civic leader, spoke for the southwest Ohio leadership that “Cincinnati will never become the air ‘Gateway to the South’ unless an airport is constructed at a location much more convenient to the majority of the air travelling public.” That attitude only affirmed Rep. Spence’s view that “the people of Cincinnati never want our side of the river to have anything that will benefit us.”

As Northern Kentucky moved forward, Cincinnati leaders remained disorganized. Not until after construction started on the first runways at the Boone County Airport did Cincinnati organize 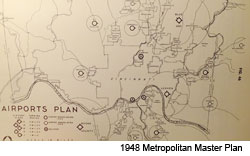 the regional planning effort that produced the Metropolitan Master Plan of 1948. One of the 18 volumes was entitled “Airports in the Master Plan (published 1946).”

The planners marshaled an argument against the idea that the Boone County airport could become the region’s new “Master Airport.” Located on the “southwesterly edge” of the metro region, it was too distant from downtown and the industrial Mill Creek and too removed from the “wealthy residents likely to patronize” air travel.

The planners argued that the best place to locate a new airport for scheduled passenger traffic was in the Blue Ash area of Hamilton County. This site was geographically more central, closer to the wealthy suburbs and accessible via the proposed Mill Creek (I-75) and Northeast (I-71) expressways. The planners argued that the Boone County Airport was a stopgap that should be ultimately relegated to a cargo airport. No matter what the planners thought, two realities shaped the future.

First, voters in Hamilton County were unwilling to pay for the development of a regional airport at Blue Ash, rejecting bond issues in 1941, 1950 and 1955. Ohioans liked to complain, but were unwilling to invest.

Second, Northern Kentucky leaders, long trapped between dismissive Cincinnati leaders and dismissive Kentucky politicians in Frankfurt, recognized that CVG could become the engine capable transforming their economy and status, and were willing to invest. Over the next 60 years Boone County became one of the two fastest growing counties in the region.

In 2017 CVG has redefined itself from being a hub for Delta to a local airport with diversified sources of revenue. For the first time in nearly a decade, every airline serving CVG reported a year-over-year increase in passengers 2016. McGraw believes that by 2021 the number of passengers will grow from the current 6 million to 9 million. And the fact that passenger and cargo service has been kept together at one airport has been critical to CVG’s revitalization.

The 70-year commitment to developing CVG is an expression of Northern Kentucky’s feisty determination and resilience.