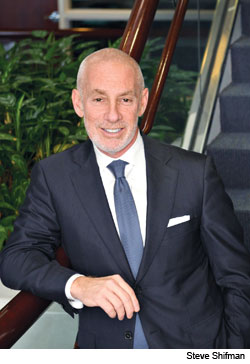 CEO and president of Michelman and new board chair of United Way of Greater CincinnatiJanice Hisle Steve Shifman, CEO and president of Michelman, a Blue Ash-based developer and manufacturer of environmentally friendly materials, was chosen to lead the United Way of Greater Cincinnati earlier this year. He has been a United Way volunteer since 2012 and has worked 28 years at Michelman, 16 of them as CEO. He describes how his corporate philosophy dovetails nicely with his role at United Way.

What do you think most people may not know about United Way?

Historically, most people think of United Way as an organization that raises a bunch of money. But I don’t think they realize that money goes to help 330,000 people every single year. So, whether we realize it or not, we all know somebody who has been touched by the work of United Way. The best way to solve big, intractable community problems—such as poverty—is through organizations like our United Way

Giving is one of our core values at Michelman. Every year in September, we have a “global day of giving,” where we shut down all of our offices—from here in Cincinnati to Mumbai, India, and Shanghai, China—and we turn people loose to go do volunteer work; the employees still receive their usual pay. It’s a great opportunity to give back. I enjoy participating personally. In years past, I have done things like packing food at the Freestore Foodbank.

How would you describe the work that Michelman does?

We work in the area of green chemistry and technology for big industrial applications. One thing most people are familiar with is the “Share A Coke Campaign,” which has special labels with people’s names printed on them. All of those labels are printed with Michelman technology. We do a lot with digital printing and packaging solutions. Our technology also is used in cars and airplanes. We don’t make those parts. But our chemistry is used to make the parts lighter and stronger. And, along with the movement around the world to make packaging more sustainable, we’re actively engaged in the packaging industry to continue to take more waste out of the waste stream.

If you had a giant megaphone and could shout a little-known fact to the world about Michelman, what would you say?

Businesses like ours, purpose-driven, have an ability to change the world. We like to say we manage our business with “a triple bottom line:” people, planet and profit. You must stay profitable to stay in business; 2019 is our 70th year in business. At the same time, you also need to care about the way your business affects people and the planet. We have fabulous people who work in our organization, and they know it’s about something bigger than just running our business. If we create the right culture, maybe they go home a little better than they were when they came into work that morning. Then maybe that makes them happier at home; maybe they’re a better parent, and maybe they’re better at whatever they do outside the workplace. I really think that companies like ours can be a force for good in the world.