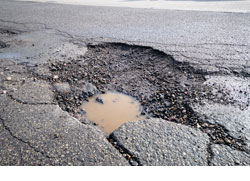 Today’s politicians could learn something about symbols from Cincinnati CharteritesDan Hurley Constructing an effective political rhetoric is challenging. Abstract political theory does not stir mass support. Politicians need symbols that are important, but not simply ends in themselves. When it comes to his rhetorical use of the border wall as a metaphor, President Trump could learn something from Cincinnati Charterites of a century ago.

Each time the snow and ice melts after a winter storm, fresh potholes blossom in the streets of Cincinnati. Hated by drivers and despised by road crews, a century ago clever newspaper columnists and an inventive group of political leaders transformed the lowly pothole from a road hazard into a potent political weapon.

For the first quarter of the 20th century, a political gang led by George Cox and his successor Rudolph Hynicka controlled Cincinnati. Lacking any vision beyond a desire to retain power, the gang was willing to risk nothing as the city fell into greater and greater inefficiency, wastefulness and corruption. Discouragingly, the vast majority of Cincinnatians accepted the situation as irreversible.

The Cincinnati Post, an afternoon paper that served industrial workers whose shift ended at 3 p.m., emerged as the only consistent public voice for political reform. The Post used its news pages for investigative reports and its editorial pages to skewer the foibles of the gang. The paper’s leading voice, Alfred Segal, launched his “Cincinnatus” column (which often ran on the front page) in 1920.

In the hands of Post columnists and cartoonists, the pothole became the symbol for all that was wrong with Cincinnati government, and, according to historian William Baughin, was “the single most important factor” ultimately bringing down the Hynicka regime.

Madison Road was compared to the ravaged battlefields of France after World War I. The lawyers representing a man charged with vehicular manslaughter for killing two children argued their client was zigzagging to avoid the potholes in the street. The jury acquitted him. Ironically, one of his lawyers was the vice mayor, Froome Morris.

Over five days at the beginning of June 1923, the Post ran a series of tongue-in-cheek articles describing the implications of an incident in which first a young woman, and then her fiancée, fell into a pothole on Linwood Avenue and ended up in Bombay, India. Worried that all of Cincinnati might fall through the hole, the citizens of Bombay threatened to launch a “Holey War” to protect their city. In the end, a contingent of Africans showed up in Cincinnati to teach the locals how to repair a pothole, staving off another world war.

Murray Seasongood and the other leaders of the Charter Committee seized on the pothole as a key symbol that they could use to help people understand the problems Cincinnati faced and the alternative approach they offered. During the 1924 campaign for the proposed reform charter, and the 1925 campaign to elect the first council under the new charter, candidates hammered home the embarrassing and dangerous conditions of the streets.

They pointed out how few miles of city streets were repaved each year and railed against the gang’s preference for expensive granite paving stones purchased from private companies with close ties to the organization to less expensive asphalt from the city’s asphalt plant.

Their favorite rhetorical example of corruption was a 1923 project to spend $300,000 for granite to improve just 4,000 feet of Kellogg Avenue running out to Coney Island. The Boss owned the amusement park.

Once the Charterites gained power after the 1925 elections, they never tired of comparing their record in street repair with the gang’s. The new city manager hired a professional engineer to reorganize the street department (“no one knew his politics, no one cared”). The professionally run government adopted the best practices employed in other cities, especially the “superheater system” of street repair that welded the old surface to the new asphalt patch. Charterites were fond of saying, “There is no Republican or Democratic method to fix a pothole, only an efficient or inefficient method.”

In the first five years in office, the reform government repaved twice as many lane miles than the gang had done in the previous 10 years, all the time “hammering down prices and improving efficiency.” Between 1926 and 1940, the city manager and the Charter Committee filled their annual reports and campaign literature with before-and-after photos of city streets.

The Charterites effectively wielded the pothole as a political symbol. Potholes were significant in themselves, but, even more importantly, as symbols, they stood for something larger, a new way of doing government. And in their simplicity, they helped citizens understand a new approach to urban government.

The problem with President Trump’s rhetoric about the border wall is that the wall has become an end in itself. Immigration policy has been in crisis for decades. Presidents George W. Bush and Barack Obama, as well as dozens of congressional members, have tried to formulate a new policy for decades. President Trump has people’s attention, but has failed to understand the connection between political symbol, rhetoric and policy.