More than $2 million in Catholic school tuition assistance has been allocated for this academic year, funded by benefactors of the One Faith, One Hope, One Love campaign conducted in the Archdiocese of Cincinnati.

“We are so pleased that the tuition assistance program is moving forward this year,” says Susie Gibbons, archdiocese superintendent of schools. “Many families will now be able to consider and attend Catholic schools in our archdiocese. We’re extremely grateful to thousands of donors that have contributed to make this dream a reality.”

The 2017-18 academic year will be the first for the permanent program of needs-based tuition aid for the archdiocese, which operates the sixth largest Catholic schools system in the country with some 44,000 students. About half the proceeds, (or $65 million) pledged in the One Faith, One Hope, One Love campaign will be used for Catholic education in the archdiocese.

In 2013, a comprehensive study of archdiocesan schools culminated in the release of Lighting the Way, a plan detailing dozens of initiatives directed toward sustaining high quality, thriving and authentically Catholic schools. Lighting the Way has an ambitious goal of assuring a Catholic school education that is accessible, available and affordable for any family who wishes their children to attend.

“It’s the middle-class family right now that’s getting squeezed, and this fund will help those folks,” says Matt Sableski, principal of Dayton Carroll High School. “They may be close to being able to afford it, but this may push them over the top.”

In all, nearly 2,200 offers were extended for elementary and high school assistance, amounting to $1,983,500 to families with demonstrated financial need. Of those awards offered 95 percent have been accepted and students have enrolled for the 2017-18 school year. The individual student awards range from $250 to $1,000.

The fund is supervised by the Catholic Education Foundation (CEF) for the Archdiocese of Cincinnati. An independent third party, Facts Management, vetted the applications. The assistance is available to any student wanting to attend an archdiocese school, whether they are Catholic or not. 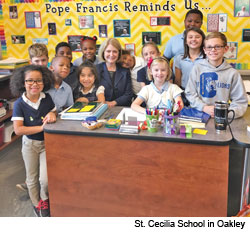 “No matter how you look at it, families who commit to sending their kids to Catholic school are making a financial sacrifice, so any assistance is very helpful,” says Dirk Allen, admission director at Badin High School in Hamilton.

CEF’s board has also approved another $200,000 in awards for 2017-18. That money will go to families experiencing dire emergencies as determined by individual principals and to qualifying new families that have moved into the area since the spring’s application deadline.

“It’s more aid to fill gaps that we can’t fill today, so existing families are still able to attend,” says Tim Fogarty, Springfield Catholic Central High School chief operating officer. “Or if somebody new is inquiring, but can’t quite get there, it’s a new opportunity to help them.”