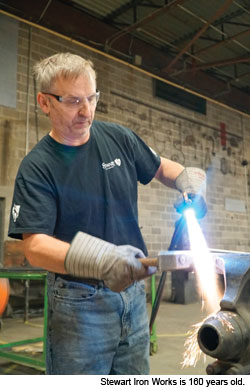 The HGC Group of Companies aims to take the 157-year-old Stewart Iron Works to new heightsLiz Engel It’s hard to fly under the radar for almost 160 years. While Stewart Iron Works has a legacy that rivals that of Graeter’s and the Cincinnati Reds, it’s not exactly a household name.

The team at the HGC Group of Companies aims to change that. It acquired Stewart this summer and looks to scale the Northern Kentucky-based maker of ornamental fences and gates.

“It feels a Verdin bell kind of company or Ivory soap. It’s part of that fabric of Cincinnati,” says President Mike Huseman. “We want to revitalize it and make our city proud.”

HGC, prior to the deal, had considered forming its own in-house iron works company and Huseman had first-hand knowledge working with Stewart during his project manager days, so the transaction was smooth. Stewart is a “tiny” outfit right now, but with the backing of HGC, and its 350 employees, he says that will change.

“We want to take [Stewart] down the national path,” Huseman says. “HGC, we have a lot of respect for a brand. Whether it’s [using our] purchasing, subcontracting relationships or bonding capabilities, we are going to grow it.” 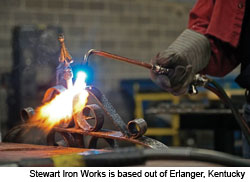 After all, there’s a legacy to protect. Walk any length of MainStrasse or Hyde Park or Downtown, and you’ll see the Stewart shield. The company created jail cells for Alcatraz and supplied the entrance gates to the White House. At one point, you could order Stewart wrought iron via the Sears Roebuck catalog.

“For us to be stewards of that brand, that’s the kind of stuff that gets us out of bed in the morning,” says Paul Moran, vice president of marketing and communications. “We love it. And frankly we love the opportunity.”