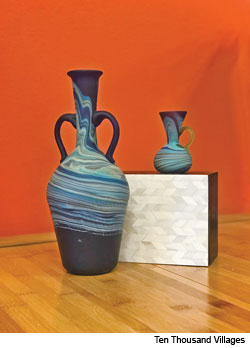 Ten Thousand Villages looks to change the world with its handmade, fair trade productsCorinne Minard What if we could change the world one gift at a time? It may sound unlikely, but that’s exactly what Ten Thousand Villages, a nonprofit fair trade organization that operates stores throughout the country (including three in the Greater Cincinnati area), has set out to do.

“We all buy clothing from various sources and we don’t think about where those clothes come from. And really all those clothes … are probably made in a sweatshop somewhere in Bangladesh,” says Drew Gates, executive director of Ten Thousand Villages of Greater Cincinnati, which operates stores in O’Bryonville, Harper’s Point and Covington. “If those thoughts cross our heads, if we change our behavior a little bit at a time, we can change the world.”

“It depends on a lot of different factors but as a nonprofit our goal is to make sure that they’re not [getting] just enough to live off but to send their kids to school and invest in their community. A lot of these villages and places don’t have a lot of infrastructure, so they set up special programs for schools or they build literal bridges or roads in their community,” says Desiree Johnson, market manager of Ten Thousand Villages of Greater Cincinnati.

The nonprofit also works to ensure that the artisans work in safe and ecologically sound conditions. For example, all leather products are created with natural treatments like tree bark and tea leaves instead of formaldehyde, which is safer for both the workers and the environment.

“[It] can take months and months before the product actually ends up on our shelves. Normal retail does not work that way at all,” says Gates. “If the product doesn’t sell, we don’t return anything to any artisan. It’s never returned. [When] we mark it down, that markdown doesn’t affect the artisan at all in any way.”

By paying at the beginning, Ten Thousand Villages is able to guarantee that workers get paid for their work. It also helps the nonprofit build long-term relationshipswith artisan groups.

“It’s about establishing a relationship that they can trust and they can count on,” says Johnson. “They can set money aside to build a house for themselves.”

While the money from a purchased item does not go directly to the artisan who made the item, it does enable the nonprofit to fund future orders from them or other artisans throughout the world.

For those wanting to do more to help, Johnson and Gates say that donations are always welcome, as all donations are used to fund payments to artisan groups.

“The more money we have in our arsenal is just more purchasing power for our artisans,” adds Johnson. “It’s just more that we can invest in them and their businesses and their products. It’s not about giving us raises or anything—it’s about buying more from them.”