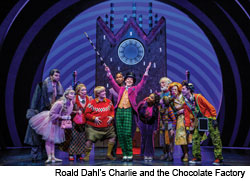 Charlie and the Chocolate Factory opens Oct. 23 in Cincinnati as the first production of the 2018-2019 Broadway in Cincinnati season. It’s a festive show. And family friendly. And it has a familiar title, so audiences are likely to flock to see the show during its two-week engagement at the Aronoff Center.

No one planned it this way, but Charlie and the Chocolate Factory is also a perfect analogy for the folks who present these Broadway extravaganzas.

Like the show’s wizard-like leading character, Willy Wonka, the Broadway in Cincinnati series has been wooing us with dreams and promises of ever-greater ones for more than three decades.

But at the same time, Willy is a businessman. A very smart and savvy one. We’re just lucky that he’s a guy who wants nothing more than better chocolate for his adoring customers. And frankly, you could say the same thing about the folks who have been bringing high-quality Broadway shows to Cincinnati since 1987.

These days, the name at the top is that of Leslie Broecker, the Louisville-based president of the Midwest Region of Broadway Across America, the group that presents the lion’s share of the nation’s top touring shows.

Broecker is the daughter of Brad Broecker who, along with his business partner, Jim Howland, stepped into the near-vacuum that was Broadway-style entertainment in Cincinnati in the early 1980s.

Over the course of the previous decade or so, one downtown theater after another had been razed. The Albee. The Shubert. The Cox. The Grand. The Palace. Keith’s. They were all committed to rubble. And only then did someone decide that something was missing.

Brad Broecker was and still is a showman at heart. To some, he felt a little like the leading character in The Music Man when he showed up in Cincinnati and promised to restore the vigor and vibrancy of Broadway tours.

He talked a good game. And he was very convincing. Best of all, he had a track record. Not a formidable one. But he had taken over the Louisville Theatrical Association in 1982 and, but by the force of his own personal charisma and connections, had made it work.

Now, he and Howland were proposing to do the same thing here in Cincinnati.

They were good. Very good. But their timing was even better.

Let’s step back a second. If you’re trying to sell audiences a yearly offering of touring Broadway shows, you are utterly dependent on what shows are opening on Broadway. That sounds simplistic, but it’s true. If there is no “product” being created at the front end of the supply chain, there isn’t going to be anything there for the folks at the end of the supply chain.

The 1970s were a particularly tough time for Broadway. There were some new shows, but there was not the abundance of them that there had been 20 years earlier. Even more concerning was that patrons under the age of 35 didn’t seem interested anymore. Perhaps the naysayers were right. Perhaps Broadway was in its death throes.

“Then came Cats,” says Leslie Broecker. It opened on Broadway in 1982, the year after it had made an enormous splash in London’s West End. Maybe Broadway wasn’t dead, after all. The irony was that its savior came in the form of a relatively plot-less operetta about felines that originated on the stages of London.

By the time the Broeckers opened their Cincinnati series five years later, the show had made its way into national touring. It’s no coincidence that it was the closing show of the debut Cincinnati season.

“Cats was huge,” says Leslie Broecker. “It was really a phenomenon. It was different from anything that had come before it. And audiences loved it.”

So when they announced that the next season would be bookended by productions of Cabaret—with film star Joel Grey—and Les Misérables, the carrot was there. The only way that patrons could be assured of getting tickets for those ultra-hot shows was to subscribe.

It’s a formula that still works. In February of 2017, Broadway in Cincinnati announced that Hamilton, arguably the most popular show in Broadway history, would be part of the 2018-2019 season. The reason for the early announcement was to caution patrons that the only way to guarantee themselves a seat would be to subscribe to the 2017-2018 season. That way, they would be first in line for tickets for the following year, the year Hamilton was coming to town.

It’s not a scam. Indeed, it’s standard policy for most theaters. Renewing subscribers have first dibs on tickets. It’s a way to build audience loyalty. And when you have a super-hot product like Hamilton it works really, really well.

“When we made the announcement in 2017, we didn’t really know how people were going to respond,” says Genevieve Miller Holt, general manager, Midwest of Broadway in Cincinnati. The result turned out to be so overwhelming that they reached subscription capacity almost immediately. That means, they have more than 24,000 subscribers.

They will have some tickets this season. The contract for Hamilton, for instance, says that a certain number of reasonably priced tickets need to be set aside for those who can’t handle the heavy lifting of a season subscription.

For Holt, though, this is a prime opportunity to get people in to see lesser-known shows, productions they might not have seen otherwise.

“Having Hamilton is a great thing all on its own,” says Holt. “But we do this because we love theater. So to us, having Hamilton also means that more people will get to see Dear Evan Hansen. And The Play That Goes Wrong. Any time we can find ways to share great theater with more patrons, we’ll do it.”