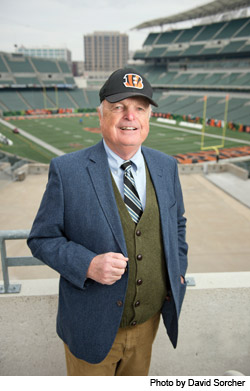 The Bengals’ much-maligned owner shares fans’ frustration but isn’t changing his stripesPeter Bronson The Cincinnati Bengals finished their 2017 season with a dead-cat bounce. After spoiling their own season with three opening losses, they spoiled playoff hopes for Detroit and Baltimore with two final wins. Then they spoiled the hopes of fans who wanted a new coach.

After 15 years in the Houdini handcuffs of futility, Marvin Lewis was given two more years to find the key.

Bengals Nation has been typically understanding.

“Mike Brown doesn’t have a goal of winning, he only wants to enrich his family,” they say of the team owner. “Mike don’t care.”

Nobody likes Mike. It’s in the Cincinnati charter somewhere next to the warnings about fatal snow flurries and genuflecting to St. Peter of Rose on Opening Day.

But what if nobody knows Mike?

If anyone knows Mike, it’s the boyhood friend who lives in the New Hampshire woods 8 miles from the Dartmouth campus where Mike was a star quarterback and Goodman played rugby in the 1950s.

He wants the critics to know: “Nobody suffers from not winning more than he does. He is accused of trying to do it on the cheap. That’s not true. They say he doesn’t care. That’s just a lot of nonsense.”

He’s right—the Bengals are not cheap. Their payroll is generous for a small-market team. Yet the “cheap” tag clings.

Brown is gracious. “We have tried their patience,” he says of the fans. “I’m off base sometimes, too.”

He knows that they will forgive murder if you win and demand the electric chair for a parking ticket if you lose.

“My No. 1 heartfelt regret,” he says, “is that we haven’t had the kind of run of success in my time that would have built goodwill and made the business more successful.”

Goodman blames an almost Bambino curse, especially at quarterback. “Greg Cook (1969) had it all, then he hurt his arm and never played again,” he says. “Somebody up there is pulling the wrong strings for them.” He doesn’t mean Mike.

Brown jokes that if given a chance to do something differently, “I would make a list of hundreds.” But his second biggest regret is the stadium-deal mythology. “They say, ‘Oh, what a rip-off the Bengals did’,” he says. “It is portrayed as a failure. It’s a success story.”

Contrary to the media narrative, Paul Brown Stadium wouldn’t have been over budget if not for a backroom power-play by a few local business leaders who shoved the stadium west onto expensive private land to squeeze in the Underground Railroad Freedom Center.

Still, the stadium has been an economic boost. If Brown had not forced a deal, there might be no new Reds ballpark and no Banks district.

“People think it cost twice as much as it did,” Brown says. “If I could do something over, most of all I would do over how that was explained.”

But he is not that squeaky wheel. Goodman tells a story to explain: “When he first moved next door, he was 12, and we were walking up the street as some kids were coming the other way. I said, ‘Tell ’em who your dad is, tell ’em who your dad is.’ He wouldn’t do that. He never let that go to his head.”

Brown laughs about his miserly Ebenezer image. “Around Cincinnati, they think I’m Daddy Warbucks,” he says, “But at league meetings I morph into a much lesser being. Some of those owners have their own air force.”

He drives an older Chevrolet. Helicopters and flashy cars are not his style. “I’d have to figure out all the buttons,” he says. And in Cincinnati, “You don’t show.”

He learned that from another close friend, former Cincinnati Financial Chairman Jack Schiff, who turned the whitewalls backwards on his first new car because it was too showy for Cincinnati.

Although born in Massillon, Ohio, Mike is pure Cincinnati, Schiff says: modest, self-deprecating, soft-spoken, kind, loyal. “We’re just Midwest nice,” he says. “Other people can take advantage, and that’s the way it happens. But at some point, we decide we will not allow that anymore and we draw the line.”

The insults and attacks “wear on him,” Schiff says. “He has to be affected by it. He reads the news, so he’s fully aware.”

“Some 30 years ago, Mike became a member of the board at Cincinnati Financial Corp., and I got a sense of his train of thought and values, and the way he respects people and their families. He’s remarkable in this regard.”

Schiff remembers the time he and his wife, Lynn, visited their new neighbors, Mike and Nancy Brown. “We walked in and he had a book open on the table. Lynn asked, ‘What are you reading?’ and picked it up. It was The Punic Wars. My Lord. That’s Mike.”

Brown may be the only NFL owner who has read Edward Gibbon’s six-volume History of Decline and Fall of the Roman Empire and the five-volume History of Rome by Theodore Mommsen, which he keeps in his office at Cincinnati’s own Coliseum.

Football is his life—seven days a week, starting at 6:30 a.m., even after long road trips. The only Bengals game he did not attend was on TV while his father lay dying in 1991. “It was a pre-season game against Detroit,” he remembers. “He was drifting in and out and suddenly looked up at the TV and said, ‘Now why’d they do that?’”

Coaching until the end.

In life beyond football, Brown is happy with a book in his hand or, better yet, with his family, especially his four grandchildren. He avoids non-game travel. “I’m an old man, 82. I’m falling apart. My mind hasn’t reached that point yet, but my body has.” Losing his brother and team co-founder Pete Brown in December was especially painful. “He was such a big part of everything here.”

His daughter Katie and son-in-law Troy Blackburn “drive the ship,” he says. His son Paul is a vice president in the family business. Mike steps in now and then to make a call. “We’re in good hands. The kids were raised on football.”

If the Bengals win a playoff game or go to the Super Bowl next year, Marvin Lewis will get the Gatorade bath of praise. If not… Mike Brown will get the cold rain of blame. The former quarterback knows that. He is the lightning rod.

“In my heart, I am satisfied that I have done some things that are good for our town,” he says. “None of us really matters that much. We can only do our thing and hand it off. Nobody is irreplaceable. Nobody is forever.”

He pauses and smiles. “I should know that better than most.”

The Lowdown From Mike Brown

Declining Attendance: “The NFL has a challenge. The new generation lives with handheld devices and we have to figure out how to keep their attention.”

Player protests: “This has been especially impactful for Cincinnati. Our own players have never knelt [during the national anthem], but it resonates here. We are Midwestern and more conservative. The African-American players see it one way and the fans see it another way. The players want to bring attention to problems to make the country better, but the fans see an insult to our flag, our anthem, our military and even our country. Too many people just don’t think in depth about it.”

Concussions: “This is a misperceived issue. The media make it sound settled. But there is no evidence that concussions lead to dementia. It’s under study, but the studies so far are inconclusive. In fact, studies show that NFL players have better health and fewer suicides. “

Criticism for the excessive violence in the Dec. 4 Bengals v. Steelers game: “It’s a rivalry game and is hard-played. The [spinal] injury to [Steelers linebacker] Ryan Shazier was very troubling and unfortunate. He tackled with his head down. Our guy didn’t give and his neck and back did. None of it [during the game] was beyond the rules. And I don’t think new rules could address these things. You can’t know the intent. They are bang-bang plays. We don’t live in mini-seconds [of slow-motion replays]. Players see a play to be made and they make it.”