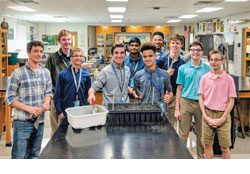 “We have probably about 40,000 alumni,” she says. “Probably about 20,000 of them are living and they’re all over the world. One of the things that we say is it’s kind of an advantage that you’ve got this big alumni network.”

Schulte knows firsthand. Her husband is an alumnus of St. Xavier High School, an all-male private school in Springfield Township. “My husband’s a grad, too, and every interview he’s ever had a St X. person has been in there and given him a shot because he was a grad,” she says.

Not only is the extensive alumni network an advantage, but the opportunity to develop into a good, young man through a network of caring and nurturing teachers and administrators is another asset, says Mike Dehring, assistant vice president for enrollment services at St. Xavier High School.

Not that attending St. Xavier is going to be cheap. It costs the parents of the 1,440 students currently attending the school $15,650 a year for tuition, he says. But it’s money well spent, says Dehring.

“St. X is a great return on your investment,” he says. “It’s not inexpensive. I wouldn’t pretend that it’s not. But I think the long-term benefits, whether it’s the scholarships that students get to college or the connections that are made through the St. X or Jesuit network are invaluable.” 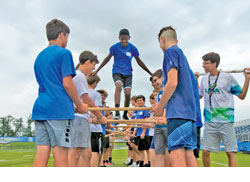 More importantly is the development of young men’s characters, he says. “I think we produce, generally, really good kids who turn into really good young men and men,” says Dehring. “So I think it’s the best investment a parent could make in their son.”

He says 99% of St. Xavier High School’s graduates go to a four-year college or university. “Our goal is to get students ready for college, but frankly we’re also trying to get them ready for their life beyond that,” says Dehring.

That means encouraging students to connect with fellow students who have similar interests outside the classroom, he says. “We have over 100 clubs and athletic opportunities for kids to begin to discover who they are,” says Dehring.

“We’re small enough where kids are known and cared for and at the same time we’re big enough so that they can find a wealth of opportunities and find peers who are like them,” he says.a

And it’s just one of the many advantages of attending St. Xavier High School.