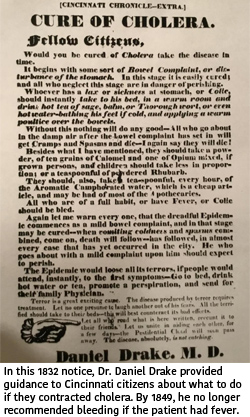 Cincinnati has learned from its experiences with previous pandemicsDan Hurley As I write this column, we are seven weeks into the stay-at-home orders, with the prospect of an effective vaccine 12 to 18 months away. Normal life, the economy and time itself, seem suspended. But against the backdrop of two earlier pandemic incidents, we are responding quickly and decisively.

In the mid-19th century Cincinnati was plagued in 1832 and 1849 by major cholera epidemics. By 1849, Cincinnati was the sixth largest city in the United States with about 110,000 residents, over 40% of whom were German or Irish immigrants.

Local newspapers noted several cholera deaths of European immigrants on boats arriving in New York and New Orleans in the Fall of 1848. The first person to die of cholera in Cincinnati arrived by steamboat on Dec. 25, 1848. No other cholera death was reported until April 1849.

Cholera was dangerous. It killed quickly, often within four to eight hours after the onset of symptoms. But little action was taken, a function of ingrained attitudes.

Most importantly, contemporary medical science offered little useful direction. The germ theory of disease was still 35 years in the future. In effect, bacteria and viruses didn’t exist in the 1840s.

Daniel Drake, one of the great physicians and scientists of the period, lived in Cincinnati in both 1832 and 1849. To avoid cholera, he recommended people avoid drafty, humid rooms, eat balanced meals, wear wool clothing and avoid alcohol. At the first onset of diarrhea, he recommended that the patient place a “poultice of mush or bitter herbs over the bowels, send for a physician or take a pill of 10 grains of calomel and one of opium.” But none of that was very useful, and Drake lost three grandchildren and a son-in-law to cholera in 1849.

A second problem was the widespread assumption that cholera would primarily impact people community leaders cared little about—working class immigrants. Dr. Thomas Carroll expressed the prevailing view that the “poor foreigner possesses not only filthy habits in his mode of living, but has a peculiar inclination to avoid ventilation in his dwelling. This is especially the case with the Germans.” Immigrants, in fact, accounted for 2,986 of the 4,114 (70%) of fatalities between May 1 and Aug. 30.

Third, mid-century Americans expected little from city government in the area of public health. City Council created a temporary Board of Health, but it did not meet until a prominent physician died in early June. Council also adopted a Nuisance Ordinance encouraging the draining of pools of stagnant water and cleanup of filthy streets where people threw their rotting kitchen waste and other refuse, expecting roaming hogs to consume the waste and leave behind manure.

Between April and October of 1849, more than 4,700 Cincinnati residents succumbed to cholera. According to historian Theodore Eversole, city government not only failed to take effective action during the epidemic, it learned nothing. Unlike a number of other cities, Cincinnati did not even get rid of its dependence on pigs as the garbage system.

Sixty years later, Cincinnati was caught up in one of the most vicious and widespread pandemics in history. The 1918-19 Influenza killed between 50 and 70 million people worldwide and 675,000 in the United States. The response of local authorities was dramatically different than in 1849.

By 1918 germ theory was well established, but, with no vaccine or pharmaceutical treatments, the only defense was isolation, quarantine and personal hygiene. Complicating the situation, America was in the midst of World War I and the federal government not only had no interest in a national policy of isolation, it was shipping soldiers, and the infection, around the world. Preventative measures were left to localities.

The 1918-19 flu came in multiple waves. The second and most lethal wave, inaccurately dubbed the “Spanish Flu,” arrived in greater Cincinnati on Sept. 25, 1918, when Mrs. George Topmiller fell ill after visiting her husband at Camp Lee in Virginia.

Dr. William Peters, the Cincinnati health officer, acted quickly, quarantining Topmiller, closing local hospitals to most visitors and warning the public to stay away from theaters and public meetings.

On Oct. 5, at a point when only a handful of cases existed, Peters and Mayor John Galvin met with business, civic and religious leaders. They agreed to support a closure order for schools, theaters, movie houses, churches and public meetings. Saloons remained open until 7 p.m., but could only sell alcohol or beer in containers, which had to be carried home.

Ten days later, with the number of cases growing quickly, which included Peters himself, officials recognized the hardship the closure had on the poor and opened penny lunchrooms in vacant schools. They also encouraged citizens to flush residential streets while the Street Cleaning Department used disinfectant on downtown streets.

By Oct. 30, anxious business owners and clergymen appealed for a relaxation of the rules, but the Board of Health held firm. Finally, the orders were lifted on Nov. 11 (Armistice Day). Mayor Galvin declared, “The people are tired of hearing of influenza and want to forget it.”

Theaters, churches and schools reopened, but within a week the number of cases among children rose and, after the Thanksgiving break, the schools were again shuttered. On Dec. 12 the Board of Health adopted a gradual reopening plan and by the last week of the year schools were allowed to reopen.

The Health Department estimated 100,000 Cincinnatians contracted the flu and 1,700 died between Oct. 10 and Dec. 31. A 2007 study by the Federal Reserve of St. Louis ranked Cincinnati as one of the cities that came through the second wave relatively well both medically and economically because of its quick action and willingness to sustain its lockdown in the face of pressure.

Today, we may not yet have a vaccine or totally effective treatments, but two things indicate progress over the last century in confronting epidemics. First, scientists sequenced the genome (a reality totally unknown in 1918) of the novel coronavirus within a month of the first case, speeding the hope of developing an effective vaccine in record time. Second, the leadership of governors DeWine and Beshear and their Public Health advisers has made state and local governments effective in way that formerly unimaginable.