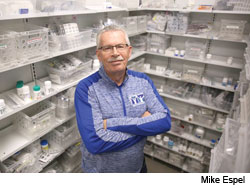 Leadership Cincinnati’s innovative ideas, like St. Vincent de Paul’s Charitable Pharmacy, have led to tangible resultsDan Hurley For decades Leadership Cincinnati has served as an incubator for innovative civic ideas. Each year classes formed project teams to identify and address community needs. Most of those efforts failed to produce enduring results. Though frustrating on one level, that record echoes the experience in many startup incubators that embrace the maxim “fail faster and move on.”

Some Leadership Cincinnati projects, however, gained traction, including Crayons to Computers, the Power Pack program operated by the Freestore Foodbank, Red Bike and Cincinnati Preschool Promise. But none has delivered more substantial and innovative results than the Charitable Pharmacy.

In 2003 Liz Carter, the former executive director of St. Vincent de Paul, suggested Class 27 work with SVDP to create a charitable pharmacy, a sort of “food pantry for medicine.” This type of organization existed in other states, including Kentucky, but was illegal under Ohio consumer safety laws. Working with the Ohio Pharmacy Board and lobbying the Ohio legislature to change the law consumed most of the project team’s efforts during their year in Leadership Cincinnati.

Ron Christian, an attorney with Taft Stettinius & Hollister and chair of the project team, remembers that until team members immersed themselves in the issue they “did not appreciate that people who are on multiple prescription medicines face hundreds of dollars in copays every month and have to make decisions about whether to have prescriptions filled or take their medicines every day as prescribed.”

By graduation Ron and the other seven members of the team were committed to the vision and stuck together to drive the completion of the lobbying effort, develop an initial business plan, incorporate and form an advisory board under the auspices of SVDP.

The charitable pharmacy began operation in 2006 in cramped quarters in the West End headquarters of SVDP. SVDP hired Mike Espel, a registered pharmacist with 32 years experience with the Cincinnati Health Department, to lead the effort. Over the last 14 years, Mike and his growing staff have filled over 500,000 free prescriptions with a retail value of $65 million.

When the pharmacy started, the hope was to develop contacts with physician offices to donate the drug samples they received. Although that remains a source of 4% of the medicines the pharmacy receives, today 59% come from pharmaceutical wholesalers who take a tax write off for donating medicines that have only a year left on their expiration dates. The rest of what is needed is purchased with donations, grants, $150,000 per year generated by the Indigent Care Levy and $100,000 from a Block Grant received by Hamilton County.

When the project team started work, they presumed that most patients would come from the low-income neighborhoods of the city of Cincinnati. In fact, only 50% of those seeking help come from the city. The other 50% live in the suburbs of Hamilton, Butler, Clermont and Warren counties.

Mike Espel is proud of the number of prescriptions filled and individuals served, but insists the truly innovative character of the initiative is that it has become one of the few “outcomes based” pharmacies in the country. This means the relationship between the pharmacy and its clients is not transactional—it is not simply about efficiently filling prescriptions—but personal.

Before any prescription is filled, the social workers and pharmacists at the Charitable Pharmacy develop a comprehensive care plan for each patient in conjunction with their primary care doctor.

Even more importantly, the pharmacy now supervises over 70 pharmacy students a year from the University of Cincinnati, Ohio Northern University, Butler University and even Creighton University in Omaha for an Advanced Practice Rotation in their final year of training. This skilled volunteer cadre allows the Charitable Pharmacy to reach out on a daily basis to make sure that patients are taking their medicines as prescribed (a remarkable 81% adherence rate). The Charitable Pharmacy can document a 49% reduction in patient re-hospitalization, a 40% reduction in costly ER visits and significant reductions of diabetes and smoking use.

The Charitable Pharmacy’s “outcomes based” approach may not entice CVS or Walgreens to change their approach, but Espel hopes that the results will attract the attention of health insurance companies interested in innovative models to improve outcomes and contain runaway costs.

The Charitable Pharmacy expanded in 2016 to a second location in the new SVDP Western Hills Thrift Store. Last November the original pharmacy moved to an expanded, 2,800-square-foot modern space in the new Don and Phyllis Neyer Outreach Center across the street from the original location. This year the Charitable Pharmacy trustees and SVDP are planning to increase the number of days the Western Hills pharmacy is open and are looking for a third location, probably in the Milford Thrift Store, to serve the eastern suburbs.

No member of the original Leadership Cincinnati project team imagined in 2003 the remarkable number of people who would be served, much less the emergence of an innovative outcome based approach to wellness or the role they would play in sensitizing young pharmacists to the needs of the poor, but that’s what makes entrepreneurism in the civic space so exciting.