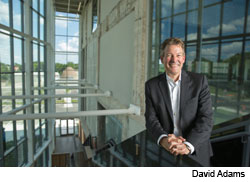 Local universities, startups and more are working together to transform the city into a new hub for innovationLiz Engel It’s Oct. 5, 2018, and there’s ribbon to be cut at the new 1819 Innovation Hub at the University of Cincinnati.

It’s a monumental day, officials say. A game-changing moment for the region. A difference maker. A big step forward in terms of innovation efforts in the Queen City.

It’s a kick-start for a new corridor, a miniature Silicon Valley, if you will.

It’s also just one way Cincinnati is playing catch up.

“Prior to 1819, we haven’t had a place where companies can co-locate to innovate,” says David Adams, UC’s chief innovation officer, who also leads all aspects of the Innovation Hub. “As simple as it sounds, placemaking is really, really important. We’re working to create a place where companies of all sizes—from startups to very large organizations—can access talent and the vast amount of research capability that the university provides.”

Officials say 1819 will not only serve as a front door—a tool for recruiting new talent—the building will also anchor a new innovation district that surrounds the Martin Luther King interchange and Interstate 71. The Uptown Innovation Corridor, as it’s billed, will be modeled after similar spans in Boston (Kendall Square), Atlanta (Tech Square) and Pittsburgh (the EcoInnovation District). Cities that all currently “have a competitive advantage” over Cincinnati, Adams says. But he hopes to play catch up. And quick.

“Talent is king. And talent has choices, especially well-educated talent, in terms of where they live,” Adams says. “Why Cincinnati? We have a phenomenal place. This is a great city. But we’re having a hard time demonstrating this capability. If you look at what’s happening in Pittsburgh, Atlanta or the migration into Austin, these are ecosystems that are highly developed. Boston has what they call ‘The Most Innovative Square Mile [On Earth].’ That’s how they market it.

“Candidly, we have to make up what other communities have done over 20-30 years,” he adds. “We’re going to continue to push this as aggressively and as smartly as we can.”

Adams says the Corridor will see significant development over the next three years. UC, for one, will lease a “digital futures building,” a new, 180,000-square-foot building for interdisciplinary research, near 1819, scheduled for completion in 2021. But there will also be apartments, eateries, retail and more, he says. More announcements are expected in quarter one.

“We truly want to create an environment where individuals can live and work, but there’s also play opportunities,” Adams says. “You can see what’s happened with Over-the-Rhine and the development there, in terms of working to attract talent and the vibrancy of that [area]. In this developing innovation district, we very much plan to create the kind of environment that supports collaborations between organizations.”

There are other ongoing efforts, of course. Cincinnati’s startup scene is booming. New ideas are spurring change in sectors like health care and government.

At bi3, for one, Bethesda Inc.’s grant-making initiative, collaboration has been key in at least one initiative—a reduction in infant mortality.

Since 2010, bi3 has invested $36 million “in innovative ideas that transform health care in Greater Cincinnati.” Or potentially breakthrough ideas, or long-term projects, that go beyond the norm.

“I guess you can say we’re a risk taker,” says Jill Miller, president of bi3. “A lot of funders want to invest in something that’s been proven, where they’re fairly certain they’re going to hit intended outcomes. But then you lose that innovative spirit. Of course we do due diligence, but sometimes people just need resources to think differently and try new things. I think that allows teams to be more creative and try new things.”

bi3’s biggest success story thus far, hands down, has been StartStrong, an effort to reduce infant mortality in Hamilton County.

bi3 provided $3.2 million to launch the three-year effort in 2013, which narrowed its efforts to Avondale. It also brought together two competing health care systems, in an “unprecedented collaboration,” UC Medical Center and TriHealth’s Good Samaritan Hospital, along with Cincinnati Children’s and Every Child Succeeds, a community-based home visitation program for first-time moms.

The StartStrong team started in the field—hosting community dinners with providers, for example—to build rapport and better to understand the barriers that prevent women from getting prenatal care. The results? Avondale now has a lower infant mortality rate than Hamilton County as a whole—it used to be 2.5 times higher. It recorded zero extreme preterm births during the project period.

Today, Cradle Cincinnati plans to expand StartStrong into 12 new neighborhoods over the next three years. Miller says bi3 will contribute $1.5 million to Cradle to aid in that effort, with another $3.7 million approved for Good Sam.

Additionally, Miller says other physicians—across the country and globally—are “very interested” in the StartStrong model and are looking to replicate it. StartStrong also spurred M-HeLP, another grant bi3 awarded to Legal Aid to provide assistance to pregnant women facing health-harming issues like food insecurity, housing or domestic violence. It’s one of very few obstetric/legal collaborations in the country.

“When you talk about Cincinnati being a leader in innovation, I think there’s pockets,” Miller says. “[With StartStrong] we’re doing everything we can to share and spread what’s working in the hopes we can help other people. M-HeLP was created to address legal problems that create and perpetuate poor outcomes.

“There’s tremendous opportunity for Cincinnati to be a leader in innovation, but it’s up to us to capitalize on that, especially in health,” she adds. “We have leading health care systems here, but ironically, some of the worst health care outcomes. So there’s a disconnect. We have a high poverty rate, we have a lot of challenges and barriers, but hopefully we can use innovation to help spur ideas to address some of that.”

For the city of Cincinnati, innovation means better, faster and smarter government services. Much of that work today falls under the umbrella of the Office of Performance and Data Analytics.

For Leigh Tami—a lawyer by trade who started as an analyst in the office before being named its chief performance officer in 2016—information is king. She wanted a way to share data beyond PDFs or static Excel spreadsheets.

From that, CincyInsights was born.

With CincyInsights, information is interactive and real time. Users can search data by agency—under parks, for example, citizens can track service requests via a map—or by topic, like public health, where food inspection records are kept. If taking a deeper dive, Tami says information can be used to track crime and blight across neighborhoods. Even the city’s heroin overdose response tracker, launched in 2016, was initially created so internal stakeholders, like the fire department, could better staff paramedics.

“I don’t come from a tech background, so I didn’t want to have to pull this data down and visualize it every time I wanted to know something,” Tami says.

“As far as what [other] cities are doing, we’re at the top,” she adds. “We already had this open data portal, but we’re the only city in the country that has structured data this way. We publish the most and highest quality data sets. We’ve had a lot of other cities—like Chicago and Louisville—approach us, trying to emulate what we’re doing. And when we talk about decision making, administration is now like, ‘What does the data say?’ And I think that’s significant. In most big cities, people are not necessarily asking [that question]. And if they are, they’re getting that information five months later.”

Tami and team—there’s now six total employees—also oversee the city’s Innovation Lab, essentially a dedicated conference room within their office where employees can deep dive and problem solve. The iLab, for short, is already credited with several victories, like cutting the building permitting process time from 10-12 weeks to three to five.

“I think Cincinnati has come a really long way,” Tami says. “Part of being innovative is taking risks. I think that’s something that, as a city, collectively, we’ve had an awkward relationship with. We aren’t sure where we sit. Are we a bigger city? A smaller city? I think the next step is to sit down together and exchange information. We certainly weren’t there two years ago. UC might not have been there two years ago. But I think now, all of us are sort coming of age within our own programs. Maybe that means we can actually contribute something to one another’s work.”