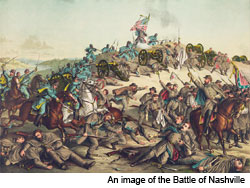 The Civil War continues to generate debate 152 years later.Dan Hurley Few Americans could have foreseen a year ago memorials to Confederate military and political leaders would generate such intense debate and violence. Given that the American Civil War ended 152 years ago, what does this tell us?

First, the vast majority of these memorials appeared on the landscape not in the immediate decades after the Civil War, but between 1890 and 1917. By the 1890s, a generation after the war, Northern political leaders and public knew they were not going to fulfill the promises made to the formerly enslaved and free African Americans enshrined in the 13th, (end of slavery), 14th (equal civil rights for all) and 15th (voting rights) amendments.

Legally, that shift was evident in the 1896 case of Plessy v. Ferguson in which the Supreme Court accepted “separate but equal” as the law. That allowed the South to fully embrace segregation, a system of legal, economic and social practices developed in the North before the Civil War, and to develop an alternative understanding of the conflict as the “Lost Cause.”

Mitch Landrieu, the mayor of New Orleans, in his insightful speech on May 19 about the removal of four memorials in his city, made it clear that the Cult of the Lost Cause used monuments to celebrate “a fictional, sanitized Confederacy; ignoring the death, ignoring the enslavement, and the terror that it actually stood for.”

In the recent debate, a lot of Confederate veterans and Southerners have been quoted, but what did Northerners think in the years immediately after the Peace at Appomattox? The views of two soldiers from Clermont County, Ohio, one famous, one not, are instructive.

Henry Clark Corbin was born in 1842 in Clermont County. He attended school at the Parker Academy in New Richmond, which in recent years has become the focus of a major archaeological and historical research project by the faculty and students of Northern Kentucky University. The Parker Academy was unusual in its commitment to educating white and African-American students, men and women, together. In 1862 Clark enlisted and became an officer in the Tennessee-based 14th Infantry Regiment of the U.S. Colored Troops.

In July 1865, the school announced the first post-war reunion. Still in the field with his unit, Corbin wrote an eight-page letter expressing his regrets that he could not attend after the nation’s “four year struggle for life and liberty.”

His letter began with a moving reflection on the significance of the Confederate attack on Fort Sumter on April 12, 1861. On a personal level, young boys were suddenly called to the “duties expected of men.” For the nation, in a strange way, that day was “the most glorious in America’s proud history. It was our flag dishonored, then it was our flag worshiped.”

Corbin never says anything against, or even about, his Confederate foes, but he has long passages on fallen comrades from the academy. He is also clearly deeply troubled by the assassination of Lincoln three months earlier, but takes some solace that his fallen schoolmates were with “great and God-like Lincoln.”

Ulysses Grant, also born in Clermont County, emerged as the Union general who drove the North to victory, oversaw the military occupation of the South and was elected president in 1868 and ’72. What becomes clear in Ronald White’s new biography of Grant, American Ulysses, is Grant’s deep and enduring personal commitment to the welfare of the formerly enslaved people and his commitment to use of federal power to protect them.

While still in uniform, he pushed President Andrew Johnson, who had abiding Southern sympathies and no concern for African Americans, to support the 13th, 14th and 15th amendments. Appalled by Southern violence against former slaves, Southern Unionists and members of the Freedman’s Bureau, Grant repeatedly proved himself ready to use the occupying army and military tribunals to protect “helpless and unresisting negroes” and “stamping lasting disgrace” on local and state officials in the old Confederacy.

Grant’s determination was especially focused on the Ku Klux Klan. Formed in 1866, initially to deny African Americans the right to vote, the group willingly used calculated violence. President Grant personally lobbied on Capitol Hill to pass a stronger Ku Klux Klan Act in 1871 that would empower the president to use the federal military to uphold constitutional guarantees. When the law passed, Grant showed himself willing to use federal powers, ordering troops into South Carolina and other states to arrest Klan members and suspend habeas corpus.

This 2017 struggle over the meaning of Confederate memorials teaches us at least two things. First, even in a country that insists it only looks forward, history is powerful. Clearly, the weight of the Civil War still bears down more than 150 years after it ended. That ought to give us more understanding and sympathy for nations in Central America, the Balkans and even Iraq who find it hard to “get past” their divisions.

Second, we need to admit that the struggle over Confederate memorials is essentially a proxy for our inability and unwillingness to openly and fully grapple with the real issue: racism.