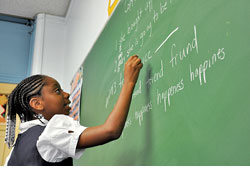 Archbishop Dennis M. Schnurr Catholic schools in the Archdiocese of Cincinnati are for everybody. While maintaining a strong Catholic identity, our schools welcome all students who want to discern God’s plan for them and share our confidence that they can achieve that plan which, Jesus promises, offers peace (Jn. 14:27), joy (Jn. 15:11) and fullness of life (Jn. 10:10).

Education has been a priority of the Archdiocese since the very beginning. Just three years after its establishment in 1821, Bishop Edward Fenwick opened our first Catholic school with 25 female students under the direction of a Sister of Mercy from France and a laywoman. Today we have the sixth largest network of Catholic schools in the United States, based on enrollment, with 111 primary and secondary schools.

And the reason for this success? The answer might be summed up in the theme of Catholic Schools Week, which is being celebrated nationally from Jan. 28 through Feb. 3: “Catholic Schools: Learn. Serve. Lead. Succeed.” The high academic quality of our Catholic schools is well known. Over 99 percent of students in our Catholic high schools graduate, and nearly as high a percentage go on to college. Our ACT scores are in the top 25 percent nationally. Moreover, our Catholic elementary school students test one to three grades higher than other students on Iowa standardized tests.

As important as that is, however, there is more to Catholic education than academics. Most of our schools in the Archdiocese have a sign near the entrance that proclaims: “Be it known to all who enter here that CHRIST is the reason for this school.” That is lived out in every classroom, not just in religion class. The fruits of this faith-based approach are graduates who are well-formed in their hearts and souls, as well as their minds.

Central to the Catholic philosophy of education is character development. Our students learn self-control, care for others, perseverance, courage, compassion and a commitment to social justice. While the impact of this cannot be precisely measured, studies indicate that strong character development may positively affect not only academic achievement, but also success in later life.

Our teachers lead in this by example. Last month, sadly and tragically, one of our teachers, Mr. Mark Klusman, who taught at Elder High School for 51 years, was struck and killed by a car while he was participating in community service with his students. Expressing their appreciation for him not only as a teacher but also as a role model, Elder students will honor Mr. Klusman this spring with a service project. All our Catholic high schools require students to perform community outreach service, collectively adding up to more than 160,000 service hours per year.

Some parents who want their children to have a Catholic education are challenged to meet tuition costs. We realize this and are striving to address it. Since 1980, generous contributors to the Catholic Inner-City Schools (CISE) Fund have made a Catholic education affordable to countless low-income parents in Cincinnati. As of the current school year, we are pleased to also offer needs-based tuition grants to families throughout the Archdiocese thanks to the successful “One Faith, One Hope, One Love” capital campaign.

Catholic schools educate the whole person and lay the groundwork for a truly fulfilling life. Our teachers are dedicated to giving every one of their students the opportunity to learn, serve, lead, and succeed. n

Archbishop Dennis M. Schnurr has led the Roman Catholic Archdiocese of Cincinnati since December 2009. He was ordained a priest in 1974, has served with distinction as a member of the papal nuncio’s staff and general secretary of the United States Conference of Catholic Bishops, and organized World Youth Day (Denver) in 1993.