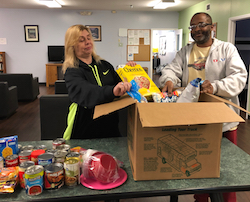 The agency wants to raise $10 million by Labor Day, saying it has seen the need for community services grow rapidly since February and the onset of the COVID-19 pandemic.

“Our goal for this summer sprint is ambitious,” says Moira Weir, United Way president and CEO. “It’s double what we typically raise in a summer. But bold action is what’s required right now.”

To help accelerate giving to reach the initial goal of $10 million by Labor Day, Procter & Gamble, whose CEO, David Taylor, is this year’s campaign chair, has committed to match the first $1 million donated in new or incremental gifts.

With so many people out of work or working from home, the initial phase of the campaign will focus on reaching prospective individual donors in ways other than the traditional workplace campaigns. These include a new website platform and text giving, the agency says. This fall will continue to mark the official start for many workplace campaigns, the agency says. To donate now, go to www.uwgc.org/united.

As part of its response to the COVID-19 crisis, United Way, working with the Greater Cincinnati Foundation, previously established the COVID-19 Regional Response Fund, raising more than $7 million and pushing more than $6 million so far into the community.