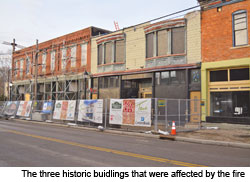 Historic downtown Loveland rebuilds after 2017 fireLaura Geraci The area was shook May 28, 2017 when a massive fire started in the middle of the night on West Loveland Avenue. No lives were lost in the fire but there was extensive damage to three historic buildings.

Local favorite Tano Bistro and Catering was taken by flames along with a Comey and Shepard Realtor and fashion boutique, Cincy Fashion Wheels. Five apartments on the upper floors of the buildings were also demolished by the blaze.

“It is not surprising that we all stopped what we were doing and tried to figure out what we could do to help,” says Scott Gordon, owner of downtown Loveland restaurant, The Works. “The owners of Cincy Fashion Wheels, Deb Walker and Janel Thompson, are amazing. They had just lost their business to the fire but organized the efforts to take care of the residents who lost their apartments to help them with clothes, furniture, transportation and new places to live.”

The community was insistent that the three damaged buildings be restored and advocated to save the historic structures. After inspection, it was determined that the buildings were salvageable.

“There are several different owners of the buildings that were burned. They all agreed that they wanted to save the charm of the buildings,” say Gordon. “I am very happy that they are able to rebuild with the same quaint look.”

Historic downtown Loveland is now in the rebuilding process with big plans for the area. Tano’s Bistro and Catering plans to return even better than before with a rooftop bar including seating for up to 50 guests. Tano’s is tentatively set to reopen in the spring of 2018.

Next door to Tano’s, there are plans for a two-story bar that will also feature a rooftop patio. Additional rebuilding plans include bed and breakfast suites, a coffee shop and bakery.

The new additions will be neighbors to new and old businesses that all contribute to the small-town charm of historic downtown Loveland.

Among local favorites is the Works, a brick-oven restaurant that opened in 2002 after the renovation of a 1902 landmark that was originally a water filling station and a firehouse. The brick-oven pizza restaurant offers guests the unique option of dining in a train-car located on the property.

The area has not missed the craft beer fad either. Narrow Path Brewing Company opened its doors in March of 2017 and intends to help downtown Loveland continue to be a unique destination by making and offering craft beer with local flavor. The draft list ranges from light and crisp to heavy and full-bodied brews along with various experimental taps.

Next to Narrow Path Brewing Company guests will find another new establishment, Fresh Press Juicery and Coffee. The juicery opened in August of 2017 and operates out of a 147-year-old historical building offering patrons fresh, cold-pressed juice and a coffee bar.