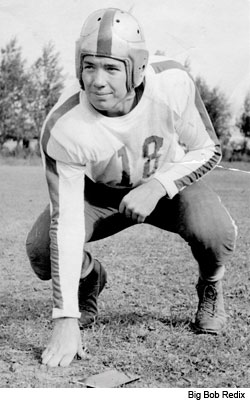 “Big Bob” Redix and other veterans helped the U.S. win the first battle of the Cold WarPeter Bronson The U.S. Army and the Air Force were battling fiercely in Germany—but the only bomb was a football spiraling gracefully through the air into the outstretched hands of Bob Redix, who ran it over the goal line to score the winning touchdown in the first American football bowl game in Europe. His Army Red Raiders won, 7-0.

What a difference peace made.

The year was 1948. World War II was over and Europe was slowly emerging from bomb shelters to sweep up the ashes and rubble. The roar of American aircraft that struck terror into bomb-cratered Berlin during the war was now greeted by cheering children, who ran into the streets to welcome “Candy Bombers” that dropped chocolate, gum and taffy on tiny parachutes.

Sgt. Robert Redix was there with the U.S. Army Constabulary police. “Some people were hoarding food while other people were starving,” he recalls. “We went in and raided those houses where they were stockpiling food.”

To make things much worse, Russia held Berlin hostage by blocking railways, rivers and roads. If they could starve out 20,000 troops from France, Britain and America, the Soviets could take Berlin and seize half of Germany.

But there was still one way to save Berlin: by air.

In 12 months, thousands of cargo planes delivered 8,000 tons of coal, food and other supplies each day. The Berlin Airlift delivered 2.3 million tons of food, medicine, coal and other supplies on more than 300,000 flights. A dozen airplanes crashed, killing 31 crew members. 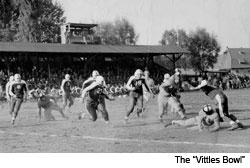 The “Vittles Bowl” was organized to help raise morale and funds for the candy drops. Nov. 15, 1948, thousands of Germans and American soldiers huddled outdoors in a cold stadium to watch American-style football.

“Big Bob” Redix remembers how he scored and won the game against the Rhine Main Rockets, an Air Force team. “Our quarterback was in the T-formation. He dropped back and found me out on the flank. He threw me a pass and I ran it in for a touchdown.”

After the Army, Redix came home to Latonia, Ky., got married, raised a family, refereed basketball and football and worked as a Covington fireman—still running to rescue families. But he never forgot his days in Germany.

“I grew up. I went in as a boy who lived on a farm. I didn’t see much. When I sailed out of New York we went past the Statue of Liberty. As it was fading away, I thought ‘What am I doing here?’ I accepted it and did the best I could. I went in as a boy who weighed 160 pounds, and came out at 205 pounds with not an ounce of fat on me. I grew up quick.”

Thanks to Redix and all the soldiers and pilots who were part of the Berlin Airlift, the first battle of the Cold War was won by the United States, showing the world the stark contrast between the generosity of America and the cold cruelty of communism. The Soviets finally gave up the Blockade in May 1949. Berlin was divided into communist East Berlin and free West Berlin.

Today, a Berlin Sportpark sits in what used to be the “Death Strip” where Russians with machine-guns would kill anyone who tried to escape East Berlin. Since the Berlin Wall fell in 1989, that no-man’s land is home to the Berlin Eagles, an American-style football team.

Robert Redix and the Candy Bombers delivered food, candy, American football and freedom to Germany. “It was a tense time,” he says. “We played to provide some entertainment and help those people in Berlin. They had a rough time of it.”