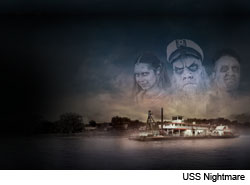 Built in 1934 as a dredging ship, the retired William S. Mitchell now serves as an annual haunt for Tristate visitors. While many haunted houses provide scares, the Mitchell could provide the real thing, as there were 112 crewmember deaths in the boat’s 45 years of active service, according to U.S.S. Nightmare CEO Terri Bernstein.

“We always joke that Disney couldn’t build a [haunted] boat as good as ours because our boat really went through it,” Bernstein says. “I’ve owned the boat my whole life and I still won’t walk through it by myself. It’s very creepy.”

All of the boat’s original machinery is still onboard, with exhibits built around it, and the ship’s natural creaks and groans provide added chills for visitors.

Prices for a 30-minute general admission tour of the two-deck ship range from $20 to $50 for a front of the line pass. Not all will make it through the tour, as the Nightmare boasts that 15 percent of patrons ask to leave the scares before completing the experience.

Adding to the frights is the return of the RIP Experience and the Captain’s Extreme Tour, which allow for a more “immersive” experience with guests that includes contact with actors. In addition, the advanced tours feature additional rooms for a more extreme trip through the boat, Bernstein says.

Guests are given special wristbands to let the actors know who is in the RIP Experience, but the Captain’s Extreme Tour is an exclusive adults-only experience, offered on Oct. 13 and 20.

“It’s definitely adult rated, there’s a lot of vulgar language and the actors aren’t completely covered all the time,” Bernstein says. “They’re not naked but they’re definitely more risqué than our regular show.”

This year may feature an appearance by the man in the white mask himself, Michael Myers, as part of a special event partnership with AMC theaters on Nov. 3. Guests will get a pass to see the release of the new Halloween reboot and a trip through the U.S.S. Nightmare.

“Who wouldn’t want to go see a horror movie and then go run through a haunted house?” Bernstein says. “It’s a great date night.”

Guests can also sign up for the Haunted Boos Cruise on Sept. 28 and Nov. 2, which features trips through the Nightmare and Cincinnati’s Dent Schoolhouse, followed by a late night cruise aboard BB Riverboats.

For more information or to purchase tickets, visit ussnightmare.com.