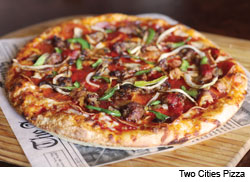 Two Cities Pizza offers the dining experience of two iconic American cities in the heart of Mason.Will Jones When the cities of Chicago and New York come to mind, food is typically one of the topics of discussion—in particular, the pizza and which city has perfected this traditional cuisine. While there will always be the debate of who serves the better pie, Zach Greves and Sean Spurlock have decided to combine the New York thin crust and the Chicago deep dish to fill their passion of serving people. Friends since the fourth grade, they’ve always wanted serve people and saw food as the perfect outlet for fulfilling that passion.

“Sean and I have been best friends all of our lives and we realized pretty early on we wanted to come up with an idea of something that would allow us to be in business together. We loved the idea of being in the food industry because it’s actually the people industry,” says Greves. “We love people, we love sharing food and drinks, and we love being on one accord with people.”

While they would often visit Chicago in high school, it was their time in college (Spurlock attended school in New York) when they realized there weren’t any places that offered both styles of pizza.

Their love for people, food, innovation and big cities became the genesis for their restaurant. “It’s so cool to us that when you go to big cities you pretty much see the entire swath of humanity, from one end of the spectrum to everything in between. You get different cultures, different experiences and different passions,” Greves says. From the “L” subway in Chicago to the New York City train tunnels, the aesthetics of Two Cities Pizza reflects the culture of both cities just as much as its menu items. Offering guests a variety of specialty pizzas, its most popular deal is the “Bridge Builder.” This comes with a 9-inch “CHI pie” and a 12-inch “NYC pie” in one value-packed deal and leaves guests craving even more.

“We make everything we possibly can in-house and if we can’t make it here then we bring it in from New York and Chicago. The same ingredients being used to make deep dish in Chicago is what we use here in Cincinnati,” Greves says.

They also offer street foods such as World’s Fair Fritters and Navy Pier Parm Fries as well as “Craft-your-own” calzones and an array of entree-sized salads. Recently celebrating the restaurant’s one-year anniversary, Greves and Spurlock are committed to Mason and quality.

“Our focus is to continue pushing the envelope,” Greves says. “We just really fell in love with what cities are, not just because they’re big and exciting and there’s always stuff to do, but it’s about people for us.”