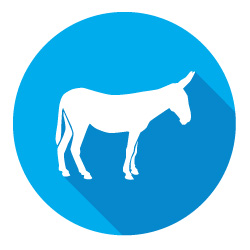 New Democratic Party co-chairs have big plans for Hamilton CountyGwen McFarlin & Connie Pillich Two strong, seasoned politicians, who just happen to be women, were recently elected to co-chair the Hamilton County Democratic Party—Gwen McFarlin of Springfield Township, and Connie Pillich of Montgomery. They are the first women to head the local party, and they represent the first shift in party leadership in a quarter-century as the venerable Tim Burke stepped down on June 9.

McFarlin and Pillich are well-known in this area as dedicated public servants, and with their experience in running campaigns and winning, they plan to use their know-how to develop a bench of diverse, skilled candidates who believe in good governing and have the right stuff to get elected.

“We want people to know that the Democratic Party is strong in Hamilton County and as we are winning more countywide offices, it is getting stronger. As the third largest county in Ohio, we are taking our first steps on the path toward making our county solid blue. Taking leadership at this time is an incredibly exciting opportunity as we are anticipating more than a blue wave this fall. We’re getting ready for a blue storm,” says Pillich.

McFarlin, a Springfield Township trustee, and the first woman and woman of color to hold this elected post, adds, “This is the year of the woman. As women, we are very comfortable stepping up to the plate to move Hamilton County forward. And importantly, we are working hard to turn what some see as a thankless job into a thankful job.”

At this early stage of their leadership, McFarlin and Pillich are developing their goals. Short-term, they are looking to embrace strategies to help candidates win their local, statewide and federal races in November. Locally, there are a slew of judicial races, which if they are successful, will turn the Hamilton County Court system blue, something the county has not seen in decades.

To achieve these goals, there will be intense initiatives to turn out the vote, and as McFarlin explains, “We are participating in a coordinated campaign. The goal is to educate the community about our candidates, and engage people to vote for all of our local candidates first. This will bring more people into the party, and in the end, will help candidates at the top of the ticket, as well.”

In a year with some big races, namely the gubernatorial and the U.S. Senate races, plus races for Congress and top statewide offices, fundraising is critical. And that’s where Pillich shines. In her six years as the representative from Ohio’s 28th District, and in her two statewide races, she has raised in excess of $6 million. Her fundraising talent will be very much in demand to support the campaigns of an array of Democratic candidates, particularly at the county level. “We need to be able to provide the resources they need in some very tough races,” Pillich comments.

And there is the all-important focus on getting millennials to the polls. McFarlin, a long-time community activist who is seeking greater diversity, mentions, “To reach them, we are actively bringing in young people, which is the most effective way to reach other young people. Voter education will be key to their understanding that every vote is critical. Using this approach, we are going where Democrats traditionally haven’t gone. We will be visible in the community and will help them channel their energy by registering them to vote, and then ensuring they actually vote.”

With the new Democratic leadership in Hamilton County, there is an optimistic tone, and as Pillich notes, “Good leadership points the way. It changes everything.”

Gwen McFarlin, a Springfield Township trustee since 1995, earned her undergraduate degree in nursing from Miami University, and a master’s degree in Public Health from University of Cincinnati. She is passionate about improving our community and works diligently across party lines to make this happen.

Connie Pillich, an attorney and former small business owner, has a military background. After graduating from University of Oklahoma, she entered the United States Air Force where she rose to the rank of captain. During her tour, she received her MBA from University of North Dakota. She later earned her law degree from the University of Cincinnati. She worked relentlessly to win Ohio’s 28th District three times, traditionally a Republican stronghold.