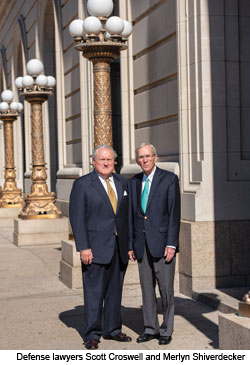 Why Tracie Hunter had to be dragged out of a courtroomPeter Bronson Pat Mahaney’s name is rarely spoken by the defenders of Tracie Hunter. One August day in 2012, as he walked home from a store in his North College Hill neighborhood, he was brutally beaten by six juveniles.

The teens sucker-punched him to the ground, savagely kicked and slugged him and threw a full can of beer into his head. The police report says, “They stated that they were just bored and were looking for something to do.” National headlines called it the “Bored Beating.”

As he recovered from severe head and internal injuries, Mahaney’s life was a quiet torture of pain and anxiety. He refused to leave his home and drank himself to an early grave at age 46. He died of liver failure, 11 months after the beating.

As the press moved on, Mahaney remained locked in his prison of fear, waiting for justice to worm its way through the courthouse compost. Juvenile Court Judge Tracie Hunter stalled, delayed and blocked the case for two years. She put some of the teens on house arrest and ordered them to do community service and book reports. Prosecutors objected. She stalled some more. The case was finally resolved when the Ohio Supreme Court suspended Hunter in 2014.

Appeals Court Judge Sylvia Hendon finally sentenced the teens. She called the beating “horrible, brutal, hideous,” and said the situation was “a disgrace and a grave injustice.”

Pat Mahaney’s brother Michael told the press, “Judge Hunter wanted to protect [the juveniles]. I think we need to be protected.”

Mahaney was white. The teens who beat the life out of him were all black. It was not a “hate crime” in the press, but it was tangled in race because Judge Hunter’s view of justice lifted the blindfold to look everywhere for racial victims and motives.

Prosecutor Joe Deters said she needed professional help. Instead, she had a small posse of enablers—amplified by the press—who painted her as a victim of racism. But the two respected Cincinnati defense lawyers who investigated and prosecuted her draw a different picture.

Scott Croswell and Merlyn Shiverdecker were appointed as special prosecutors because Hamilton County Prosecutor Joe Deters was the target of numerous grievances by Hunter. The prosecutors had “no comment” while Hunter’s supporters shaped the headlines. Now they are setting the record straight.

“We gave her every opportunity to exit this whole thing without criminal charges,” Croswell says. “We made it clear to her that if she would resign we would have no objection to her running again, to let the citizens speak. But she chose to litigate and was found guilty. There was no great joy in this.”

During Hunter’s five-week trial Croswell says, “She chose the scorched-earth approach with virtually everyone in her 16 months as judge.

“Judge Hunter, just like a child, cannot be told no.”

Right on cue, when she was sent to jail on July 22, she went limp and dragged her heels as a deputy carried her out by the arms and her supporters yelled racism.

Her attorney, Clyde Bennett, argued that she was the victim of a conspiracy, “Hamilton County political warfare” and “incestuous politics.”

That backfired in U.S. District Court, where Hunter’s claim of 51 misconduct charges against Shiverdecker and Croswell was rejected because their statements were “invited” by Bennett’s “hyperbolic arguments.”

In court, Shiverdecker pointed out that Hamilton County has had many black judges, including several women. The “conspiracy” against her had to include the local press, the prosecutor’s office, courthouse officials, the Ohio Supreme Court and Court of Appeals, two federal courts, several teams of lawyers she hired and fired, and the public defender’s office.

“She had an opportunity to make a positive impact on the juvenile court. Given the demographics of most of the people in court, she could have been a wonderful role model. She tried to make positive changes, but she chose to go about it the wrong way and the illegal way.”

She made many enemies. But her worst enemy was Tracie Hunter.

She ran for Juvenile Court in 2010, but lost by 23 votes. She sued to count more ballots and won more than a year later, taking the office that she said was promised by God.

But by then her opponent, Republican John Williams, had been appointed to a vacancy, making him the senior judge in Juvenile Court. Hunter refused to speak to Williams and issued an order declaring that she was the boss. The Ohio Supreme Court replied: No, you are not.

So she redoubled her efforts.

Judge Hunter blocked the press from the “Bored Beating” hearings, was sued by the Cincinnati Enquirer and other local media, and then hired lawyers to defend herself. Ordered by a federal court to let the press back in, she refused and was held in contempt.

The Ohio Court of Appeals said her legal team was illegal. Only a county prosecutor can defend such lawsuits, to protect the interests of the public. But she refused to cooperate and decided to defend herself, paying the $1,100 filing fee with a county credit card intended only for official travel.

Meanwhile, prosecutors suspected that she had deliberately stalled cases to run out the clock on their appeals. An investigation confirmed that cases were falsely backdated with her signature.

She was indicted on nine criminal counts. The jury found her guilty on one: Unlawful interference. When she found out her brother was being fired from Juvenile Court Youth Center for striking a child in detention, she demanded confidential documents, delivered them to him and “used the power and influence of her office” to save his job.

Along the way, she filed complaints of unethical conduct against Prosecutor Joe Deters and his team; personally attacked trial judge Patrick Dinkelacker; tried to get reporters arrested, investigated or thrown out of court; and caused so many delays in court cases that Public Defender Ray Faller finally filed a lawsuit against her.

The trial was “chirpy,” says Shiverdecker. Tempers flared and Judge Norbert Nadel scolded both sides. A federal judge called it “contentious and inflammatory.”

Hunter and her lawyer could not dispute the evidence. So they blamed conspiracies, attacked the prosecutors, played the God card and the race card, and said she did it for the children.

But as her cases stacked up like rush-hour traffic behind a car-wreck, how many children suffered abuse, neglect and delayed adoptions?

Still, Tracie Hunter got a lot of breaks. Social justice groups rushed to offer free legal defense, as her appeals dragged through state and federal courts for five years. The man at the top of her enemies list, Prosecutor Deters, asked the governor to release her from jail if she would only admit her guilt. She refused.

Sheriff Jim Neil released her after 75 days—less than half of her sentence. She emerged defiant, calling on God to punish her enemies for injustice.

By the time it was all over, Croswell was not entirely surprised at the bizarre scene of a judge being dragged out of a courtroom. “It was staged to make her look like a civil rights martyr. She had given a speech comparing herself to Fred Shuttlesworth, Martin Luther King and Rosa Parks. She truly fashioned herself a martyr. I think she believes it.”

But it fizzled like a wet match. No black judges and few civil rights leaders or city officials went to war for Hunter. “The silence speaks volumes,” Croswell says.

Maybe it says that Cincinnati has finally left behind the chronic, inflammatory race conflicts of the past.

Would Pat Mahaney be glad she went to jail? Or would he forgive the judge who delayed and denied justice while she punished his attackers with book reports?

He can’t say. He did not live long enough to see Tracie Hunter’s version of justice.