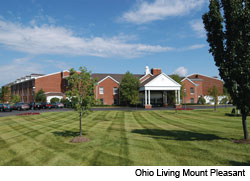 But residents like Charles Wyncoop and his wife find themselves on the verge of returning to their home, the place where a 14-alarm fire made heroes out of young servers and kitchen staffers who were finishing their work for the day.

“Our brave culinary department and local rescue teams made sure every resident escaped the building unharmed,” says Devon Moyer, director of sales and marketing for Ohio Living Mount Pleasant. “Those kids literally carried [residents] down flights of stairs [to safety].” 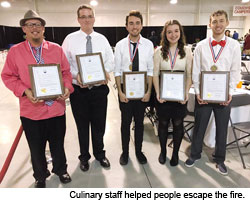 This fire displaced over 65 residents, many who suffered the loss of personal belongings and treasures, Moyer says. Many that night, as always, relied on walkers, scooters and, like Charles’ wife, power chairs.

“It’s been a humbling year for all of us at Ohio Living Mount Pleasant,” Moyer says. “We have witnessed great loss and change, but it would be impossible not to be in awe of our residents’ resilience and faith.”

Apart from the 100 percent survival, there was another silver lining to the ordeal.

“We were able to re-design and modernize our already beautiful apartments,” Moyer says. “The 30 north wing apartments scheduled to open in December of this year will feature modern open floor plans, beautiful granite and maple finishes, private laundry rooms and one or two walk-in showers.”

Two hundred people came to celebrate the revival Aug. 24 at the Monroe community’s annual concert, which had to be scaled down last year because of the fire that broke out a week before the concert was scheduled.