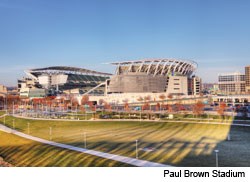 The BengaLs/Steelers rivalry continues to be a humbling experience for Cincinnati fansDon Mooney Our family comes from diverse religious traditions—I went to Catholic schools, my wife hails from the Jewish tradition. Our traditions diverge in interesting ways: No fish on Friday for me vs. no lobster or shrimp for her. Ever.

But there are similar traditions that cross religious divides. Our Jewish friends have an annual day of atonement—Yom Kippur. Tradition calls for spending the day holed up in temple, and fasting from food and drink, which cleans the slate for the past year’s transgressions.

Catholics have Purgatory, a sort of post-mortem Yom Kippur. Depending on how stained my soul was, the nuns warned I could spend months, or even decades, waiting to earn my promotion to heaven. I imagined an endless night of Parish Bingo snack bar duty or a damp, cold and sunless Cincinnati February lasting, say, 38 years.

Like much of society, I’ve taken a secular turn since my 1960s altar boy days. My fall Sundays no longer involve mass. Instead, it’s the NFL.

But karma requires that sports fans also must atone. For Bengals fans, our day of atonement comes at least once each year, when the dreaded Pittsburgh Steelers come to town.

From Franco Harris, Terry Bradshaw and Bill Cowher, to Antonio Brown and Ben Rothlisberger, the Steelers have humbled our Men in Stripes more than any other football team. In a series with at least two games annually since 1970 (with a merciful exception in the strike year of 1982) the Steelers have won 63 out of 98 encounters with our ‘Gals.

For those of us reckless enough to buy Bengals season tickets, the annual “purge” has seemed particularly painful. Since our brief golden years from 1980-90, the Bengals home record against the Steelers has been a dismal 26 losses to only four wins. Marvin Lewis has credibly guided the team but has only two victories over the Steelers in 18 games at Paul Brown Stadium.

No wonder so many terrible towel-twirling fans decked out in yellow and black come annually to gobble up our tickets to relish their (nearly) annual triumph here.

Did Hamilton County taxpayers pay more than $700 million just to construct an altar upon which, year after year, the Bengals hopes could be sacrificed to avenge some long-forgotten offense visited upon the denizens of the Monongahela Valley?

Even worse, all those Steeler victories have not been your run-of-the-mill, any-given-Sunday affairs. They typically fall into the rip-your-heart-out-and-cram-it-down-the-garbage-disposal variety. Who could forget the following home games?

– Twofer 2015: In the regular season match-up at PBS, the Steelers broke Andy Dalton’s thumb and ended his season in a 33-20 victory. Then, in a wild card play-off re-match, back-up QB A.J. McCarran threw what should have been a decisive TD pass with less than two minutes left. But after a Jeremy Hill fumble, and back-to-back flags against Adam Jones and Vontez Burfict, a Steelers field goal secures an 18-16 win. CBS called it a “playoff meltdown for the ages.”

– 2018: The Bengals take another lead with less than two minutes left. But long suffering Bengals fans knew too much time was left on the clock. Yet another final seconds “Big Ben” TD pass ends the home town misery, 28-21.

After these decades of anguish, it’s only fair that Bengals dead enders like me can at least earn advance credit off some Purgatory time. The good news: no fasting required on Steelers’ day.

Don Mooney is an attorney, a past member of the Cincinnati Planning Commission and is active in local politics.