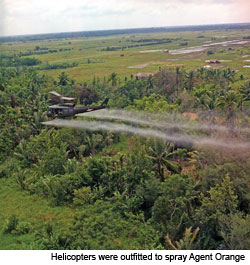 The impact of Agent Orange continues 50 years laterPeter Bronson Planes and helicopters were outfitted so that they could spray Agent Orange over forests and jungles.

Dave Hurst was a student at the University of Cincinnati in 1967, about to get married, looking for work. It turned out Uncle Sam had a job for him in Vietnam.

It was the kind of snafu that bureaucracies do best; his work application canceled his student deferment and he was reclassified 1-A. He enlisted to avoid the draft, chose medical supply training and landed “in country” at Phuoc Vinh Base near Saigon.

He defended his base during ground attacks and saw a lot of casualties. But not all were from enemy fire. Many were victims of exposure to Agent Orange.

In August 1961, the first black barrels were rolled off transport ships on the docks in South Vietnam. Ten years later, 350,000 of the 55-gallon drums had been emptied on forests, jungles and rice paddies.

Some were striped in white, green, blue, pink or purple. But most were Agent Orange, a supposedly harmless herbicide that contained deadly Dioxin. More than 50 years later, it is still killing and maiming American veterans and people in Vietnam.

“Some of the men I served with had direct exposure to it,” says Hurst. “They would come back from patrol and it was just all over their skin. They had terrible burning and itching. Some had inhaled this stuff.”

The defoliation was ordered by President John Kennedy to strip away jungle cover used by Viet Cong and North Vietnamese soldiers to infiltrate South Vietnam.

It was called “Operation Ranch Hand”—an ironic harvest of death, disfigurement and misery.

The men who loaded the planes, handled the barrels and patrolled in recently sprayed areas suffered most, but anyone exposed could be afflicted by an encyclopedia of symptoms, including muscle and motor dysfunction, nervous system disorders, inflammation, skin diseases, cancers, leukemia, heart disease, psychological disorders, Parkinson’s disease and diabetes.

Birth defects, miscarriages and disabilities could pop up years later. The VA denied any problem for years, but now offers benefits for a broad list of Agent Orange disabilities and still does medical studies.

An Agent Orange victim spoke for many veterans when he said, “I died in Vietnam and didn’t even know it.”

Admiral Elmo Zumwalt ordered use of the defoliant in the Mekong Delta to protect Swift Boat sailors from shoreline ambushes. His own son, Elmo Zumwalt III, was among those sailors who were poisoned by Agent Orange, and had a son who was disfigured. Before Agent Orange killed him, Zumwalt III insisted that many lives were also saved: “Thousands, including me, are alive today because of Agent Orange.”

In Vietnam, the Red Cross estimated 2 million cases of Agent Orange cancers and a half-million children with birth defects such as blindness, deafness, spina bifida, cleft pallet and missing limbs. Some contaminated “hot spots” are still off limits.

“They would defoliate an area and send the troops in right away,” says Hurst, who participated in a study of Agent Orange exposure. He volunteers at the VA with his Mount Washington Post of the American Legion.

“We never thought our own government was going to kill us. I came home in one piece and I consider myself very, very fortunate that I have no psychological or medical issues.”