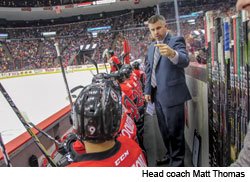 Cyclones’ head coach Matt Thomas is looking to do just that by creating a winning teamDavid Lyman “Stay focused,” reads the sign hanging above the entrance to the Cincinnati Cyclones’ dressing room. “Stay Positive,” reads the next.

But what is happening beyond that locker room is anything but standard. Out there on the ice, head coach Matt Thomas is leading a small revolution. A slightly quixotic one, in some people’s eyes; he’s trying to turn Cincinnati into a hockey town.

Pretty cheeky, because Cincinnati is a baseball town, right? No matter how dreadful the Reds are, we still love them. Maybe “tolerate” is a better word. But the connection is there; “Cincinnati” and “the Reds” are almost synonymous.

There are the Bengals, too. And now, FC Cincinnati. Mind you, it’s too early to tell if they’ll turn out to be the real thing or just another passing—and expensive—fad.

But the question remains—hockey? To most Greater Cincinnatians, hockey still feels like some exotic import from the north. Most of us didn’t play hockey growing up. Our winters may be chilly, but they’re not long or bitter enough to freeze over every tiny pond in the neighborhood. Typically, that is where the love for hockey is born.

None of that matters to the ever-optimistic Thomas.

“When I got here, everyone had an expectation of success,” says Thomas. “Certainly the management and the players did. But so did the people who came to watch us. Them, most of all.”

And he delivered. Last season—Thomas’ first—the club won 51 games, tied for the second most in franchise history. They won the Brabham Cup, awarded to the ECHL team with the most regular season points. And Thomas copped the Brophy Award, honoring the coach who contributed the most to his team’s success.

But they lost in the division finals. A great showing. But for Thomas, whose goal is always a championship, it wasn’t enough.

“I know it’s a cliché, but we play to win—always,” says Thomas. “No one comes to the ice to lose. So yes, I was very proud of what we accomplished last season. But I want more this year.”

Last season’s accomplishments are all the more surprising when you consider how little time he had to prepare. The Cyclones announced his hire on August 7, 2018, barely two months before the season’s first match. In an ideal world, he would have been in place shortly after the previous season ended in early April.

“We moved to Ohio two days after we accepted the job in Ohio,” recalls Thomas’ wife, Andrea. “It was crazy.”

It was even more crazy when you realize that, besides coming up with a strategy for a team of hockey players he didn’t know, the Thomases had to find a house, settle in and locate schools for their two elementary school sons.

“Hey, it’s always a new journey and a new group,” says Thomas, who has a reputation for staying positive, whether wooing the press, leading youth hockey camps or guiding his team through their grueling morning practices.

“It’s not an act—he’s really, really good with people,” says Andrea. “He’s willing to listen to other people’s ideas and is as humble as he is confident. I think that’s why he’s always been so likeable in the community.”

Clearly, Andrea is his biggest fan. But she is every bit as tough and competitive as he is. Raised in Sarnia, Ontario, at the southernmost tip of Lake Huron, she played high-level college soccer at Wilfrid Laurier University in Waterloo, just 40 or so miles west of Matt’s childhood home in Mississauga.

“I knew what this life was going to entail before we got married and had children,” says Andrea. “We’ve been pretty fortunate. It’s not always easy. But we’re behind him. And at this stage, we’ve lived a pretty amazing, interesting life.”

At the moment, Matt’s life is largely defined by the endless hours on or near the ice of the newly renamed Heritage Bank Center—formerly U.S. Bank Arena. 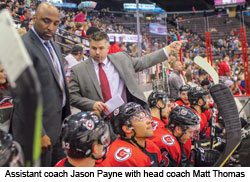 There’s not much more than 100 feet separating the ice from the crowded and unadorned office Thomas shares with assistant coach Jason Payne. There’s a big-screen TV, a few white boards, a couple of chairs and little else. Here, it’s all about what takes place on the ice. No need for a fancy office.

There’s no easing into practice here. Everything is done full-out. Speed, speed and more speed. All with a rock-hard puck rocketing along at 85-plus miles per hour.

“This is all about building skills and stamina and an awareness of everything that is going on around them,” says Thomas.

They’re working on three-on-one breakaways. The players hurtle down the ice, crisscrossing and gingerly passing the puck back and forth before unleashing full-speed slap shots at the goal. Quickly, another trio makes its way down the ice. And another and another.

The drill moves with such feverish velocity that it makes an NBA breakaway look like a slow-motion exercise.

Cody Sol, a towering 6’ 6” defenseman from Woodstock, Ontario, quickly skates to the bench to grab a swig of water. He’s an intimidating presence on the ice, and one of the anchors of the Cyclones’ defense. As he pulls off his helmet, he grins as great clouds of steam emanate from his shaggy head of hair.

“It’s cold out here, you know,” he says, nodding and quickly returning to the drill. Like the rest of these guys, he doesn’t want to miss a moment of practice time. This is, after all, what they have been working for since they were kids.

Thomas is pushing them to work harder.

“Don’t be so f——g careful,” he bellows at one of the players. “You’ve got to work here. Failure here will make it work tomorrow night.”

And it does work. The following evening, they beat the Fort Wayne Komets 5-4.

Hockey is a hungry sport that moves at a breakneck pace. Sit in on any NHL practice and you’ll see it. But these young players are even hungrier. Perhaps it’s because they still have so much to prove; to coaches, to scouts, to fans and, in many ways, to the communities and families who supported them so long to reach this level.

Don’t misunderstand. These guys are not amateurs. This is, in every way, professional hockey. They’re paid. But, as Thomas points out “these guys aren’t playing to get rich. They’re playing because they love the game. And because they want to win.”

And Thomas is good at helping them do just that. With a formidable mix of enthusiasm and know-how, he has proven to be a game-changing force, especially during his head coaching gigs with the Fresno Falcons and Stockton Thunder.

Maybe it’s because he’s as hungry as his players are. He readily admits that he hates to lose. You can see it on the ice during practice. Sometimes it’s as if he is willing his players into action. He pushes and cajoles, he encourages and sometimes even demonstrates. But unlike coaches that we have all seen, he doesn’t embarrass players. Players are not the enemy.

Underneath all the tough-talking, expletive-laced, spit-on-the-ice bravado, he is just a guy who wants everyone to love hockey as much as he does.

“I grew up with this game,” he says. His dad, Art Thomas, Sr., played for several teams in the IHL, including the Dayton Gems. “I grew up the middle of three boys. How does that saying go? You learn how to be competitive when there’s three boys and one potato on the table. Let’s just say that I usually came up with the potato.”