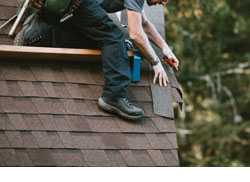 Area roofers give tips for those considering adding a new roofDavid Holthaus It buffers the wind, sheds the rain, repels the heat and insulates from the cold. Your home’s roof may be the hardest working, most under-appreciated part of the house. When it’s working well, you hardly notice. But when it goes bad, all kinds of problems await.

Replacing a roof can be one of the most critical home improvements, but, unfortunately, the industry suffers from a few fly-by-night, quick-hit contractors.

That’s one reason why Nick Sabino, founder and president of Deer Park Roofing and chairman of the board of the National Roofing Contractors Association, is touting a nationwide certification program, a new initiative from the trade group.

“It’s kind of like taking a driver’s license exam,” Sabino says. “There’s a written part of the test, which is a knowledge-based test and then there’s a hands-on skills assessment.”

The purpose is to recognize roofing as a professional trade, like plumbing or electrical contracting. Those two trades have paths for professional certification, something the roofing trade has lacked.

“We really want to improve consumer confidence,” Sabino says. The certification is neither cheap nor easy, he says. “But at the end of the day, the consumer is going to have a better experience with the roofing contractor and that’s what we’re looking for.”

The certification would be for individuals, not for companies. That’s because there’s so much subcontracting going on the roofing industry that “the person who actually installs the roof might not be the person you hired to do the roof,” he says.

The trade association says the certification offers national, professional recognition, using independently validated expertise and skills and provides a certification that stays with tradespeople throughout their careers.

More information about the program is available at the group’s website, nrca.net.

Sabino himself founded Deer Park Roofing in 1996 at the age of 24 without much knowledge of the trade.

He grew up in Deer Park and graduated from Xavier University in 1994 with a bachelor of science degree in mathematics. He attended graduate school at University at Cincinnati but did not complete a master’s degree.

“I was trying to be an actuary, but one of my friend’s parents talked me out of it and said I should instead use my personality,” he says. “A good actuary wouldn’t have taken the risks that I have taken, so it was great advice.”

He was renting a two-family unit to a roofing worker who often asked Sabino if he had other properties he could work on. Impressed by his tenant’s integrity and work ethic, Sabino would look for roofing projects for him. A homebuilder friend of his saw what was going on and suggested Sabino start a roofing company.

He read technical manuals and went to job sites to learn from installers, determined to learn the trade. Sabino made it a practice to grow the company 25% to 30% a year and now employs 125 people at two branches, one in Deer Park and the other in Florence, Kentucky.

In June, Sabino began his tenure as chairman of the National Roofing Contractors Association.

Roofing contractors are working with record backlogs now, Sabino says, partly because of the strong economy and partly due to the rainy weather, which cut into available workdays. “Demand for roofing is very, very strong,” he says.

That’s why he recommends staying away from contractors who come to the door looking for business.

“I would recommend not walking away from those types of companies; I would run,” he says.

The NRCA recommends taking some time to evaluate roofing contractors before hiring. The group suggests taking these steps before signing a contract:

– Check for a permanent place of business, telephone number, tax identification number and, where required, a business license.

– Insist on seeing copies of the contractor’s liability insurance coverage and workers’ compensation certificates. Make sure the coverages are in effect through the duration of the job.

– Look for a company with a proven track record that offers client references and a list of completed projects. Call these clients to find out whether they were satisfied.

– Check to see whether the contractor is properly licensed and/or bonded.

– Insist on a written proposal and examine it for complete descriptions of the work and specifications, including approximate starting and completion dates and payment procedures.

– Check to see whether the contractor is a member of any local, state, regional or national roofing industry associations, such as NRCA.

– Call the Better Business Bureau to check for any complaints that have been filed.

– Have the contractor explain the project supervision and quality-control procedures. Request the name of the person who will be in charge, how many workers will be required and the estimated time of completion.

– Carefully read and understand any roofing warranty offered and watch for provisions that would void it.

– Keep a healthy skepticism about the lowest bid. As the adage, goes, if it sounds too good to be true, it probably is.