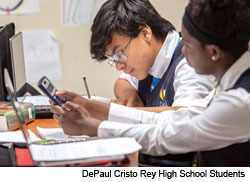 DePaul Cristo Rey High School stays focused on its students, both before and after graduationChristian Meininger DePaul Cristo Rey High School, a Catholic high school that serves families who want a private, college-preparatory education for their children but may not be able to afford it without financial assistance, is expanding less than eight years after it first opened to better serve its students.

“We’re building a permanent campus here in Clifton,” says Sister Jeanne Bessette, president of DePaul Cristo Rey High School. The high school began a capital campaign in 2017 for what it has termed its “campus enhancement.” The school has raised $20.8 million and has exceeded its fundraising goal.

Bessette says that the school started fundraising with its friend base—those who already work with and support the school—which led to them asking their friends. Connections were built from friend connections, says Bessette, so in the end “very few people that [supported us] were complete strangers.”

As Bessette spoke during a February interview, a jackhammer could be heard not far away. “We are under construction, literally,” jokes Margee Garbsch, director of communications and marketing.

“We were scrappy to begin with, but we just ran out of space. We knew it was time to build,” Bessette says. After originally opening in 2011 with six classrooms and five teachers, Bessette, says that the school began to ask itself, “What’s the 50-year plan?”

DePaul Cristo Rey’s campus enhancements include adding a gym, cafeteria, theater and a three-story academic building that will house 22 classrooms. The school believes that its new facilities will be state-of-the-art, helping the school keep up with an ever-changing world. Bessette says that DePaul Cristo Rey will be “the newest high school in Cincinnati.

“We wanted to give the kids a ‘big kid school,’” she says. “This will be a real high school campus.” The new facility will be able to accommodate 425 students, an increase from the current number of 325. The school will also be adding a laundry facility and food pantry.

All students who attend DePaul Cristo Rey High School complete a financial aid assessment prior to enrollment. Each student must qualify for admission. DePaul Cristo Rey invests in its students “to and through college”—a model that has been established in the DePaul Cristo Rey model. The national DePaul Cristo Rey network is made up of 35 Catholic work-study schools. The goal of each school is to prepare students from low-income families to achieve a college degree.

One day per week, students do not attend school—instead, they head to work to gain experience for college and the work world beyond. This program also helps to pay for the education. Garbsch says that the school now has relationships with more than 100 businesses in the Greater Cincinnati area. Garbsch says that students are required to attend a two-week training course, which prepares the students for the corporate work-study program. In this training program, students study skills such as answering the phone in a corporate environment, greeting people professionally and dressing for success.

DePaul Cristo Rey High School has a 100 percent college acceptance rate and has seen 160 of its students graduate from the school. After graduation, the school continues to stay in touch, supporting them with not only encouragement, but also with minor expenses while they are in college. Garbsch calls these expenses “gaps in financial aid”—for example, the cost of books or transportation. The school is currently raising funds for this endowment.

One particularly significant DePaul Cristo Rey success story is that of a student named Theresa. This student became pregnant while she was attending DePaul Cristo Rey and she considered dropping out. Bessette advised her to stay in school, and the support system at the school carried her on, helping her to not only graduate from high school, but she is also set to graduate from Berea College in Kentucky as well.

Berea College has a work-study program, too, and if students participate they are able to gain their degree without debt. Theresa was able to participate in this program and bring her child with her when she attended college. The school has a unique set-up, and a “special dorm,” Bessette says, where students can stay with their children. They gain support and find commonalities with other students who have brought their children with them. Theresa is on track to graduate on time, in four years, and has received several job offers.

Current senior Daniel Gilliland says that the newest graduating class is applying to schools across the map—a development that he thinks is different from past years. Gilliland says that he has applied to 16 schools—his top choices are Georgetown, Princeton and Villanova.

Lainez has been accepted to Ohio State University. While she has not decided where she will attend, she plans to study biology.

Along with supporting students in the college journey, DePaul Cristo Rey aims to educate the families of students. Bessette says that the college admission process can be overwhelming and complicated, particularly for family members who many not have attended college. She says the families of some of the students must be educated on the process, which is constantly evolving. Financial aid applications alone can be a minefield. Bessette says that this detail is only a small part of the school’s mission to “assist families to the level that they deserve and that they need.”