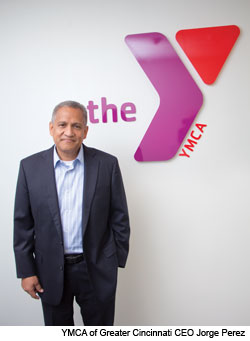 The YMCA of Greater Cincinnati is a whole lot more than just a gym and swim.Eric Spangler Want to see something super cute?

Check out the 3-year-olds participating in yoga class at a local YMCA, says Jorge Perez, CEO of YMCA of Greater Cincinnati.

Well, YMCA facilities do have pools and workout rooms. “We don’t shy away from the fact that that’s what we do, but we also say to folks we are not just that gym and swim,” says Perez. “We are so much more.”

It’s all part of the YMCA’s larger mission, Perez says, which is “to put Christian principles into practice through programs that build healthy spirit, mind and body for all.”

“We are about creating environments for people to develop healthy habits and healthy lifestyles,” he says. “And this isn’t just physical health but spiritual health and mental health.”

It all starts with youth development, he says. The early childhood and preschool programs the YMCA offers are important to develop kids cognitively, he says.

“We’re preparing them to enter kindergarten and we’re measuring their progress along the way in those programs,” says Perez. “We also make sure that they’re eating well and getting access to dental health and some mental health.”

The YMCA also offers after-school programs, camps, sports programs, swim lessons and teen programs, says Perez. “We serve anywhere between 32,000 to 33,000 kids from 0 to 20 years old in any number of programs,” he says.

Those YMCA facilities also serve adults and seniors. “We have approximately 20,000 family memberships,” Perez says. “We serve about 132,000 individuals through the memberships.”

Whether a child or a senior citizen, Perez says when it comes to maintaining a healthy, active lifestyle human development is the key. “Human development is consistent whether you’re 6 months old or 99 years old,” he says. “This has always been the secret sauce of the YMCA.”

The formula for that secret sauce is to make sure those participating in a class, lesson, game or camp at the YMCA are learning and achieving something, Perez says. The recipe for different ages may change slightly but the goal remains to help participants achieve goals.

“So if they’re taking tumbling classes we want to make sure that they actually learn to tumble,” he says. “Or if they’re sitting in a chair doing stretching because they’re 85 years old and they need to learn to stretch.”

A swim lesson at the YMCA should be as much about learning to swim as it is to meet the people in the swim class, he says. By building relationships it helps people achieve their goals, says Perez.

“There are a lot of people who are able to meet fitness goals not because the YMCA has the right equipment but because they made a friend and the YMCA had nice equipment,” he says. “You’ve got to have both.”

Once they build relationships Perez says the YMCA wants to make sure that people have a sense of belonging and that they feel excited about being a part of something bigger than themselves. “It’s one of the reasons why we are not shy to tell people about our scholarships because we want people who work out at the YMCA to know that they’re not just buying a gym membership but that they’re participating in a movement to create a stronger community,” Perez says.

Those scholarships pay for about $2 million in college scholarships and help first-generation college students break the cycle of poverty. “We’re going to make ways for our neighbors and friends who can’t make a way for themselves,” he says.

By lifting up friends and neighbors the YMCA is helping to build a stronger community, says Perez. The YMCA’s social responsibility aspect addresses the unique needs of that community and creates a program to solve those problems, he says.

And that may mean going into communities where the community just needs a YMCA, Perez says. “They may not be able to afford us and we’ll figure that out internally,” he says.

The challenge for the YMCA these days is trying to match its capacity to the community’s needs, says Perez. Thirty years ago there was not an obesity challenge or opioid epidemic, he says. “Families were a lot different.”

The YMCA must “bite-size” its response to these new challenges and communicate to others that it is more than just a gym and swim, Perez says.

“That way we can get the resources that we need to address the needs of the communities that we seek to serve,” he says.