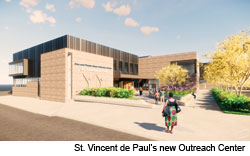 St. Vincent de Paul celebrates 150 years of serving the community by expanding its reachChristian Meininger The Cincinnati Reds isn’t the only organization celebrating 150 years in 2019. “They have a bigger budget, but our bullpen is better,” says Skip Tate, St. Vincent de Paul’s director of community relations

St. Vincent de Paul is best known for its food pantry, charitable pharmacy and thrift stores, but some might not be aware of the full scope of its programs and impact on the community, which includes a bed program, a homelessness prevention program and a car donation program. St. Vincent de Paul works as a “safety net,” Tate says, to help Cincinnati residents stay above the poverty line. The organization supports and encourages individuals to gain full employment.

The church groups are key in finding people in many neighborhoods across Cincinnati who need services. Tate points to the fact that poverty in Cincinnati has “spread out” over time, where it used to be more centrally located in areas such as Over-the-Rhine. Cincinnati has “one of the highest poverty rates in the country,” Tate says. “We also have a lot of generous people who help meet the needs.”

St. Vincent de Paul’s charitable pharmacy is evidence of the fact that the organization has evolved over time. Tate says that the demand at the pharmacy is high largely because of the rising cost of medication. “As the needs of society have changed, we’ve changed along with it,” Tate says.