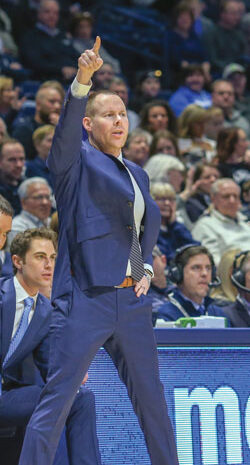 Though still new to head coaching, Steele had already accrued 10 years of coaching experience at Xavier under Sean Miller and Chris Mack before ascending to the top job. That has helped him hit the ground running as a head coach in a way he may not have been able to at a different school.

“I’m obviously going to be my own guy,” Steele says, “but having the relationships on campus and around campus and having a great understanding of what Xavier is, who we are—I don’t know if there’s anybody that has the perspective that I’ve had.”

Year two in the head coach’s seat has also made this round of recruiting easier, especially by retaining the three assistant coaches whom he hired prior to last season. Steele has quite the class to show for it: four-star recruits KyKy Tandy and Dahmir Bishop and graduate transfers Jason Carter and Bryce Moore join an already potent core of returning scorers in Quentin Goodin, Paul Scruggs and Naji Marshall.

“It’s been great to see some of our older guys really show a lot of leadership and help teach our system to the younger players,” Steele says. “That’s so powerful, when you have a player-led team. Tyreke and Quentin—those two specifically—have done a great job of showing [freshmen] Dieonte Miles, Zach Freemantle [and] KyKy Tandy the way.”

More depth on the roster has made the team much stronger heading into regular season play while also stoking some competition among the players for important minutes. Steele points out that sacrifice will be a key trait if his team is going to be successful. That will mean some players may have to accept fewer minutes or shots in a game for the greater good. But Steele sees the team gelling together well already, helped by a summer tour of games in Spain.

“I love where our chemistry’s at at this point in the year,” Steele says. 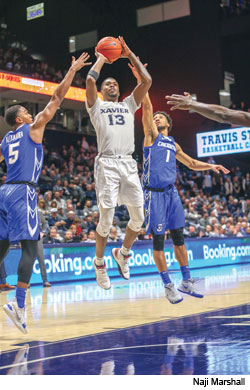 But with high expectations, Steele is emphasizing with his players the importance of working hard for the ultimate goal: playing meaningful tournament games deep into March.

“We define our own expectations,” he explains. “That’s what I told our team when I saw the AP ranking. All of that stuff is great—I think it shows the respect that our program has, that our brand has throughout college basketball. But we have to earn that right every single day. You earn your wins in practice.”