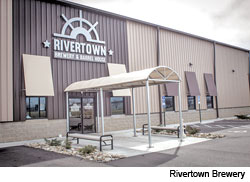 Rivertown Brewery celebrates its 10th anniversary with new food, classic brews and goatsKevin Michell Ten years ago Jason Roeper had a desire to make good beer locally and a budding reputation for crafting unique brews. The only problem was that the local landscape wasn’t quite ready for it.

“When I started it was about fighting just to get people to notice,” Roeper says.

Strange though it may seem, brewpubs weren’t nearly as ubiquitous in the Tristate 10 years ago. In fact, before 2012 Ohio laws made it cost-prohibitive to open a taproom or self-distribute.

Roeper and his young company ran into a lot of difficulty in being granted commercial space but in 2009 he found a location in Lockland with the right combination of industrial capability for production, proximity to the highway to keep distribution overhead low and a consistent source of good, clean water with which to brew.

Now, Rivertown Brewery is the second-largest independent craft brewer in the city and its Monroe taproom and eatery is both a community fixture and a regional destination for quality food and drink.

The local brewing operation started its 10th anniversary celebration a bit early as Rivertown began self-distributing its beer to Cincinnati bars, vendors and shops in October 2018.

This new autonomy over distribution—in addition to owning the building in Monroe where their Barrel House is located—has been a welcome relief to Roeper and his wife and partner in running Rivertown, Lindsey.

“It’s been really exciting to get that piece of our business back in our hands,” Lindsey Roeper says, “and to have control over the whole process from start to finish.”

But 2019 will see many more celebratory events for Rivertown Brewery’s anniversary. First, May will bring the return of the wildly popular YoGoat event at the Barrel House. The combination of morning yoga and free-roaming baby goats in the taproom has quickly sold out its previous iterations in December 2018 and this past February. Rivertown aims to offer the event quarterly for the foreseeable future.

Also part of the 10th anniversary festivities is the return of a few old favorites from Rivertown’s large stable of beers. Its pumpkin ale will be reappearing late in the summer of 2019, as well as a few classic brews from earlier in Rivertown’s history—the specifics of which others will be re-released this year are being kept under wraps for now.

Visitors to the Rivertown Brewery & Barrel House on Hamilton Lebanon Road in Monroe will notice an updated food menu. The emphasis is on Roeper’s other love—barbecue. The recipes and rubs are his own creation, with the execution of the menu aided by head chef Zac Payton’s sense of flavor and ability to run a busy kitchen.

It will surely be an eventful year for Rivertown’s 10th anniversary of operations, but what the Roepers may celebrate most is just how far they’ve come in a decade.

After overcoming uncertainty, Rivertown has found a lasting home in Monroe and a sustainable means of supplying its artful brews to the Cincinnati area.

“There’s something really beautiful about it,” Lindsey Roeper says. “Last year was a bit difficult, but out of it has come a real sense of ‘OK, this is who we are’. We’re in a really good place now.”

The Monroe facility and taproom is a place the Roepers are pouring their hearts and souls into. Their focus is on maintaining their ingenuity for creating unique libations and being present with the community, making sure to ask their visitors what they’d like to see brewed up next.

“With the landscape changing I think you’ll see people going back to the basics,” Roeper says.

But that doesn’t mean Rivertown will completely revert to keeping it simple. Its sour beers and hard mineral waters are an excellent gateway for those who aren’t as wild about beer as others. “We have a pretty good rate of converting people who don’t normally like beer,” Lindsey Roeper says.

More than anything the Roepers want Rivertown and its taproom to be a landmark long into the future.

“We’re excited to continue offering a welcoming place that is truly for everyone,” says Lindsey Roeper.