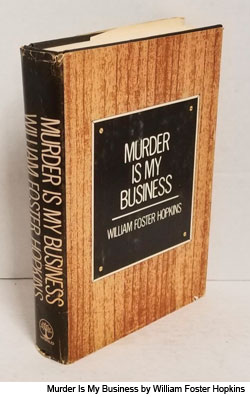 William Foster Hopkins was ready to give up and say “to hell with it.” He was the best defense criminal lawyer in Cincinnati, a courthouse Houdini who could magically set clients free no matter how they were handcuffed by police and shackled by prosecutors.

But the “Socialite Murder” of 1956 was impossible. Shy, awkward meter reader Robert Lyons had not only signed a confession to the stabbing murder of wealthy housewife Audrey Pugh, but even re-enacted it on film for police. For a jury, that was more drama than Perry Mason vs. 12 Angry Men. It was hopeless.

But then Hopkins’ assistant Ginny Heuser said, “Foss, what do you say we listen to the whole story.”

It’s still good advice. The whole story about Hopkins is one of the best little-known books about Cincinnati.

“Foss,” as he was known at the courthouse, could spin a tale and wrote with the same wit and style that mesmerized juries. By the time he wrote Murder Is My Business in 1970, he was as old as his century—made wise in the courthouse college of crime, seasoned by the bitter chills of defeat and thawing springs of success.

“Carefully now I cross the street in the wake of younger men in a hurry,” he writes in his introduction. “To be seventy is to be no longer fleet. To be seventy is to see the traffic cop grow young and the newsboy grow old… It is, at times, to have known too many people and to have known too many people who have cried. But criminal law is my work. My stock in trade is fallen sparrows. I visit the unvisited. I comfort the damned.”

Foss was a national bridge champion, an undersized high school pole-vaulter and a college football player nicknamed “Wee Willie” whose classmates named him “best athlete” with the loudest clothes. He won a banjo in an Army crap game and learned to play so well he toured with a band.

But few knew all that. What they knew was that he was the only hope for all those fallen sparrows. He was the last man who would stand up in court for them when a few crucial words to a jury could determine life or death. And that made him a target for backlash, hate-stares and threats.

It speaks in a dead language from a Raymond Chandler novel: triggerman, safecracker, electric chair…

The “Head and Hands Murder,” also called “The Blockhead Murder,” made big headlines in the 1930s. A former Cincinnati Fire captain’s body was found, missing the head and hands—until the missing parts were discovered “perfectly preserved” in a block of concrete. Hopkins lost that one, and the killer was executed.

In 1958, Hopkins defended Edythe Klumpp in what local papers called “The Crime of the Century.” Louise Bergen had been found by duck hunters, shot to death, her body burned and dumped at a public beach on Cowen Lake.

Klumpp, a waitress at the Sky Galley Restaurant, was the live-in lover of the victim’s husband, William Bergen. She said she accidentally shot Louise Bergen when the two met in Klumpp’s car to discuss the triangle.

“To defend anyone on a first-degree murder charge where a life is at stake is a Herculean undertaking and soul-searching experience,” Hopkins wrote. “But to defend a woman who tells you one falsehood after another is to have embarked upon a hazardous undertaking which is doomed from the very outset.”

Klumpp was convicted and became the fourth woman sentenced to “dance the dance electric” in Ohio, Hopkins wrote. But facing the chair on death row, she changed her story and said Bill Bergen shot his wife. After Hopkins persuaded Gov. Michael DiSalle to question Klumpp with “truth serum,” DiSalle commuted her sentence. That cost him re-election, but Edythe Klumpp was paroled in 1971 and died in 1999, at 81, without the aid of electricity.

Hopkins had better luck in the “Socialite Murder.” He found out the meter reader’s route that day didn’t match the time of the murder at the Hyde Park home where Audrey Pugh was stabbed more than 20 times with a paring knife.

Lyons had finally confessed at 4 a.m. after he was grilled in a locked room for 11 hours and told the police had fingerprints that did not exist. Sleepless, scared and demoralized, he followed the detectives’ instructions to replay the murder on film.

In a twist that would surprise even Alfred Hitchcock, Hopkins found out that Robert Lyons was a “snowman.” He had ichthyosis, “a congenital disease in which the epidermis continuously flakes off in scales.” Hopkins had Lyons stand on a mat in the courtroom, then showed the jury the flurry of “snow” that had fallen around his feet. None of it had been found near the body. The verdict was not guilty.

Hopkins had a habit of keeping pieces of evidence from his trials. In his book, he offered a tour of his office:

“Over there is a glass case, the sort found in an old-fashioned dry-goods store, and in it is a collection of guns. Each gun in that case killed someone. And I defended the ones who pulled the trigger. The hammer in the glass case? It’s not for nailing pictures to a wall. The hammer was used to hammer a person straight into the hereafter. The broken Coke bottle? Used for the same purpose. Because of those dozens of death weapons in that old-fashioned case, dozens of people have died. Dozens of prosecutors have cried for justice. Dozens of juries have searched their souls. And after each trial I have returned to this office, each time a hundred years older.”

Murder Is My Business is a time capsule of the cruelty, brutality and stupidity of humanity at its lowest ebb, and the fumbling, stumbling system of justice that is the worst—except for all the rest. It reminds us of a quaint time when one murder was a tragedy worthy of sensational headlines and pulp-fiction nicknames. Today, death deals in statistics, numbing us with numbers.

There’s something else in that display case of murder weapons and fallen sparrows. It’s the signature of a man who spoke for a city’s conscience. No matter how hopeless a case looked, Foss Hopkins did not say “to hell with it.” He listened to the whole story.

His verdict: “For most of them, life had been ordinary until they got involved one time—and one time only—with murder.”

The Frontiersman by Allan Eckert (1967). Before there was Daniel Boone, there was Simon Kenton, the fugitive killer who changed his name to Butler, fought in the American Revolution and the Indian War and survived torture by the Shawnee with such courage he was adopted by the tribe. Kenton County, Kentucky, was named after him, along with bridges, schools, towns and pubs in Ohio, Indiana, Kentucky and Tennessee. Bonus: Dark and Bloody River, also by Eckert. The history of our region is dark and bloody indeed.

Boss Cox’s Cincinnati by Zane Miller (1968) is a must read for anyone who wonders about Cincinnati’s Charter Party anachronism. Bartender, bookie and butcher George Cox ruled Cincinnati for 30 years with a machine that was oiled by corruption and fueled with prostitution, gambling and graft. The World Series was hatched in his Over-the-Rhine headquarters bar. His mansion became the Clifton Branch of the Cincinnati Public Library.

Syndicate Wife by Hank Messick (1968) tells a made-for-Hollywood story about a hatcheck girl who marries a mobster, then rats him out. “Gangster’s Wife Squeals,” the headlines said. When Attorney General Bobby Kennedy launched his crusade against organized crime in 1961, he indicted Newport, Kentucky, aka “Sin City.” His target was thugs such as “Trigger Mike” Coppola, the squat, ugly hitman and husband of Ann Drahmann Coppola, who had written to beg Kennedy for help. Bonus books: Inside the Beverly Hills Supper Club Fire by Ron Elliott with Wayne Dammert (2010), and The Beverly Hills Supper Club: The Untold Story Behind Kentucky’s Worst Tragedy by Robert Webster and David Brock (2016). Dammert and Brock were there. Their stories are graphic and shocking, connecting the dots between mob rule of Newport and the nearby fire that killed 165 people on May 28, 1977.