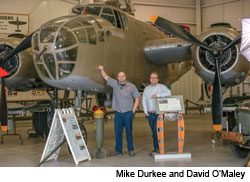 A B-25 bomber at the Tri-State Warbird Museum takes center stage in a George Clooney-directed miniseriesPeter Bronson Somewhere over the North Atlantic, with frigid water stretching beyond the horizons in every direction, it occurred to Mike Durkee, restoration and maintenance manager for the Tri-State Warbird Museum, that he was trusting his life to a 73-year-old airplane, suspended a few thousand feet above the deep ocean by two Wright 2600 Cyclone engines that were cutting-edge technology in 1935.

“When we took off, I was just, ‘OK, I’m going to ride an airplane.’ But when we left the land behind and we were out over the ocean, it hit me: This is a real thing.”

The “Axis Nightmare,” one of only about a dozen B-25 bombers from World War II that still fly, had taken off from the Tri-State Warbird Museum in Batavia on a lovely day in May. But at 9,000 feet over the Atlantic, in the unpressurized, unheated airplane, it was 25 degrees.

The twin radial engines were making a combined 28 cylinders of ear-blasting noise, burning two gallons of oil an hour. Each detonation of those giant pistons felt like a sonic body blow through the thin fuselage, pounding the crew relentlessly, leaving them worn out and exhausted when their feet finally touched the ground again. “And we weren’t being shot at,” Durkee says, comparing their experience to the pilots who flew B-25s in combat.

Stuffed into the cramped airplane with Durkee were pilot Paul Redlich, co-pilot Dan Gleason and their flight attendant, a dashboard hula girl in a grass skirt, who can be seen on flight video shimmying to the pounding drums of the props.

When carbon monoxide and the smell of oil and fuel made him queasy, Durkee could crawl through a narrow tunnel into the greenhouse nose. “When you’re sitting up there with all that glass and nothing but ocean under you, you think, ‘What if something happens? What do you do?’”

The pilot’s answer, Durkee says, “Start throwing everything out of the airplane to get lighter.”

They were on their way to Sardinia, Italy, via Vermont, then Greenland, Iceland, Scotland and France, following the same route that was used to ferry B-25s and other aircraft to Europe during World War II.

It turns out that 31 hours and 5,000 miles from Batavia to Sardinia is the shortest route to Hollywood.

“It began with a random phone call,” says Tri-State Warbird Museum President David O’Maley Jr. “They asked, ‘Would you like to work with Paramount Television and fly your B-25 to Italy for a movie?’”

That was in January 2018. The old airplane finally landed back home in July. “It was a wild six months,” O’Maley says.

He describes the film as a remake of Catch 22 directed and produced by George Clooney. It will be a six-part miniseries airing sometime in 2019 on the streaming Hulu network. Parts will be played by Clooney, Hugh Laurie and Kyle Chandler, with Christopher Abbott as the protagonist, Yossarian.

The original 1970 movie, starring Alan Arkin, Orson Welles and Bob Newhart, was based on the classic book by Joseph Heller, who flew as a B-25 bombardier in Italy during the war. The title became a catchphrase for a bureaucratic paradox. In the book, pilots who tried to avoid more missions by claiming insanity were automatically judged sane because anyone who wanted to fly would have to be crazy—a Catch 22.

“The original movie used 17 B-25s for 1,500 to 2,500 hours of flight film,” O’Maley says. “For this one we had two airplanes and filmed 35 hours in the air. The selling point was that they were going to make it as accurate as possible, including filming on location.”

The interior of the airplane is as tight as a carnival ride, with sharp edges, levers, buttons, fire extinguishers and random pieces of essential gear and equipment on every flat surface.

“About 95 percent of the flight was over the ocean,” O’Maley says. “They went for three hours and 45 minutes at one stretch without seeing land. It was pretty nerve wracking.

“On the way back they had two cylinders acting up, causing a power loss, but it was not noticeable. Paul [Redlich] had already lost an engine once in that plane so he knew how to fly it that way if he had to.”

Jared Barrow flew as crew chief on the return flight. “There was no heat. It was miserable,” he says. “You were always either too cold or too hot. You had to love it to be there. But when we came over the Cliffs of Dover, the clouds parted and it was just beautiful. That was a very moving experience.”

Barrow was invited to be in the miniseries in various walk-on parts. “They said I looked the part.”

When they landed in Italy, a crew hired by the production company cleaned and repainted the entire aircraft in one day, O’Maley says. “I asked Paul how it looked when he got there. We knew it would have oil all over it, and it might look good from a hundred feet away. But after the paint job he said, ‘It looks magnificent. Ten times more authentic.’

“And when it rolled up the ramp after it came home and landed at the museum, I was just amazed. It really looks like it’s been in a war.”

Hollywood magic made the B-25 look like a grizzled combat veteran. The bottom of the airplane is still splashed with Italian mud that was carefully applied by hand, then hosed and dripped into place. Careful application of silver paint was used to create the impression of raw metal exposed by repeated takeoffs and combat in the hot, dry climate of Southern Italy.

O’Maley was required by the U.S. Department of Defense to get International Traffic in Arms Registration as a “defense article exporter,” although the military technology of the B-25 “defense article” is more than 70 years old. “They told us we had to account for the manual for the aircraft at all times. I could have told them anyone can buy the exact same manual for $32 at the Smithsonian.

“The contract from Paramount was 45 pages long,” O’Maley says.

When he got that first call out of the blue, “The first thing I asked is what are you paying us. I can’t disclose the compensation, but I can say the museum has never been in a better position financially. And if I was asked to do it again, I absolutely would.”

That means the B-25 brought home a victory for the other elderly warbirds at the museum, including a P-51 Mustang, a P-40 Warhawk, a TBF Avenger, an F4U Corsair and even a German Focke Wulf fighter that is undergoing restoration, along with others.

Redlich, the ace pilot who flew them all, retired in October. “He always said that next to the P-51, the B-25 was his favorite,” O’Maley says.

Video of the flight to Italy shows the airplane landing in Greenland on a runway that seems to disappear into deep blue water dotted with ice floes. “The old girl is running great,” Redlich says after they touch down.

With all that Hollywood makeup, the B-25 looks the part of a World War II veteran. But there may be more airplane talent waiting for an audition in the Batavia hangar.

“We heard whispers about a Steven Spielberg movie that may be in the works about World War II,” O’Maley said. “We think there’s a good chance we will have some opportunities in the future.”

It’s easy to see why. Unlike actors, these old airplanes speak to us about the World War II years because they were there. Every machine from the past is an encyclopedia of its time, with stories to tell about the people who made them and used them. And there are no machines more graceful, appealing and thrilling than the warplanes of World War II.

For now, anyone can visit the Tri-State Warbird Museum collection at 4021 Borman Drive, Batavia. The museum is open Saturdays from 10 a.m. to 3 p.m. and Wednesdays from 4-7 p.m. Admission is $12; students and veterans $7; World War II veterans and any veterans in uniform are admitted free.