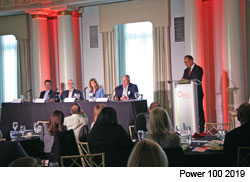 Regional experts weighed in on how to make Cincinnati more innovative during the 2019 Power 100 Breakfast ForumCorinne Minard The panelists of this year’s Power 100 Leadership Forum all agree that innovation and leadership are key to making Cincinnati a destination for top talent. However, the city still has a way to go before it can compete on an even playing field with tech hubs like Boston and Austin.

“We’ve visited several areas that are creating innovation districts but we need a development with walkability, green space, connectivity, places where it’s pleasant to work at and you can live there, too,” said panelist Beth Robinson, president and CEO of Uptown Consortium, Inc.

An innovation district—in which an under-performing neighborhood is regenerated into a desirable location for innovative companies and people—is already in the works in uptown at the University of Cincinnati. UC is looking to make its new 1819 Innovation Hub the center of this district.

“In creating 1819, we’re truly creating the front door for the University of Cincinnati and the community, but we’re also creating the anchor within Cincinnati’s developing innovation district,” said panelist David J. Adams, chief innovation officer of UC’s Office of Innovation.

“You’re going to see a lot of activity in the Northern Kentucky region in and around clustering in those areas and driving innovation in those spaces,” he said. “We really look forward to driving opportunity to all of us in the region, not just in Northern Kentucky.”

While cities like Austin became technology hubs almost by accident, panelist Mike Venerable, CEO of CincyTech, said that is no longer the case.

“Cities are way more intentional. The thing about intentionality is we have to work hard to create these new companies. But we can’t really predict which ones will be transformational. That’s why pipeline is so important, importation of capital is so important. We have to do these things,” he said.

Ultimately, Cincinnati needs to become a destination location to attract and retain the people it needs to grow, said the panel.

“I think as a community we need to embrace diversity and differences. I think that’s what young talent is seeking and I think they’ll leave if they don’t feel that we’re doing a good job with that. I was struck when we took the trip with the chamber to Toronto how welcoming they were to immigrants and to other people coming into the community,” said Robinson.

Adams, who also visited Toronto, said that Toronto’s strategy is working. “People who graduate from colleges in Toronto stay in Toronto. In fact what we’re starting to see is people from the United States moving to Toronto as a destination location,” he said.

For the attendees of the event, a major concern going forward was including existing communities and not leaving them behind. Robinson said that was a major concern of the Uptown Consortium as well.

“I can’t say we have it all figured out but we’re learning a lot as we’re going and I think the biggest thing from our point of view is that we’re being very intentional about it,” she said. Those steps have included inviting community leaders to attend development coordination meetings and contracting area business for projects.

“What we need here in this region, in the Midwest, is a bit more confidence in cultural change,” he said. “We’ve got to drive into the future of this region. We’ve got to have the confidence to say, ‘I can create a company, I can do something, I can fail and it’s going to be OK.’”