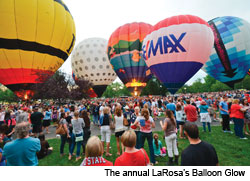 Coney Island celebrates the 20th Balloon Glow, first responders and moreKevin Michell For many eastern Cincinnatians, summertime is synonymous with Coney Island. Home to the Sunlite Pool, its surrounding waterslides and rides, and annual traditions like Summerfair, Coney is a seasonal gathering point that sees nearly half a million people visit it each year.

The 2019 season holds many events in store, including the 20th annual LaRosa’s Balloon Glow.

Featuring more than 15 grounded hot air balloons that light up the night on the park’s Moonlite Mall, Balloon Glow has been held every July 3 since 1999. Using the evening before the Fourth of July was unique when the annual event began and has allowed Coney Island’s celebration to stand out among the many others in the city.

“It’s an iconic event for the whole area,” says Steve Edwards, the park’s director of operations. Balloon Glow has become Coney Island’s biggest annual event, with previous iterations bringing as many as 25,000 people to the park.

For Tom Rhein, senior vice president at Coney Island and an employee of the park for 35 years, the event combined with the rides and attractions staying open well into the night creates a special feeling.

“The park’s just humming,” Rhein says. “It’s just full of life, full of energy. To me, it’s why I do what I do—people come in for a few hours, they forget all their worries and just love being with each other.”

Of course, it wouldn’t be the Balloon Glow without a Rozzi’s fireworks display lighting up the sky above Lake Como at 10 p.m. Prior to the balloons being lit up, Cincinnati Circus will bring its stunt show—complete with aerial acts, chair stacking, fire juggling and more—to the park with multiple performances during the day and on July 4 as well.

Mid-June features six days honoring those who provide valuable service to the city and its communities. First Responders’ Free Days occurs June 9-14. Police personnel, state troopers, sheriffs, firefighters and emergency medical technicians get free admission to Coney Island, as well as discounted admission for up to six of their guests and special deals on concessions.

Rhein says it’s a unique opportunity for families to interact with first responders and learn about what their service means to the communities they aid, particularly during June 12’s Touch-a-Truck event featuring fire department and police vehicles.

But, for Rhein, each summer at Coney is about more than the events or Sunlite Pool itself. The guests and the atmosphere they create when the park is full are the main attractions.

“We can’t be what we are without guests and families and customers who are here to animate us into what we can become,” Rhein says. “The best amusement parks make time disappear. If you can do that then you’ve worked your magic.”