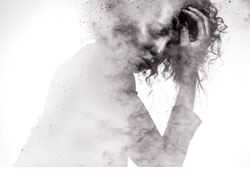 Local experts say that those who suffer from depression don’t need to do so alone thanks to community resourcesDeborah Rutledge An irony of depression is how isolating the condition can feel, even though there are plenty of sufferers.

The National Center for Health Statistics reported 8.1 percent of American adults aged 20 and over had depression in a given two-week period during 2013–2016.

Still, “depression often is a very lonely illness,” rendering those going through it with a frustratingly limited ability to understand or explain it to loved ones, says Dr. Zachary Pettibone, staff psychiatrist at the Harry and Linda Fath Young Adult North inpatient unit at the Lindner Center for Hope.

“It’s difficult to communicate with family members when you’re feeling depressed,” says Dr. Justin McCutcheon, psychiatrist and assistant professor at the University of Cincinnati. “The exact emotional state is hard to put into words; often it is sufficient to simply let your family know that you are struggling, or that you are going through a lot of emotional pain.”

Likewise, loved ones experience a diminishing level of companionship from the depressed friend or family member as social withdrawal is a common symptom of depression. For those people, Pettibone recommends resources like the National Alliance on Mental Illness to help with their situation.

But sometimes friends and colleagues don’t pick up on the signs, perhaps because the sufferer is trying to carry on as best they can, unwilling to talk about it for fear of embarrassment, shame or appearing weak, Pettibone says.

Practitioners have a common, emphatic response dispelling those concerns.

“There is no shame in seeking out help for this, just as you would for any other medical condition, like chest pain or shortness of breath,” Pettibone says.

“Depression is not a sign of weakness or that you are a bad person,” McCutcheon adds. “I would also like people to know that there is hope for them, and that very effective treatments exist for depression.”

Medication may be prescribed, most commonly Selective Serotonin Reuptake Inhibitors, or SSRIs.

“These medications can help reduce some symptoms of depression within a span of four to six weeks,” McCutcheon says. “Usually they do not ‘cure’ depression, and the people who do best are the ones who combine appropriate medication management with psychotherapy and lifestyle changes.”

He says the most common psychotherapy provided by far is some form of Cognitive-Behavioral Therapy, or CBT.

“Usually a therapist meets with a patient six to 12 times for about an hour each, and the sessions usually focus on trying to connect situations in that person’s life with the different emotions and thoughts they are having,” he says.

Although symptoms of depression vary greatly, they usually include a down or depressed mood, fatigue, a lack of enjoyment in things, perhaps a short fuse or irritability with others, sleeping too much or too little, weight changes, and feeling in a “fog,” or trouble concentrating.

When the depressive symptoms are long lasting, continuing for two weeks or more, they are considered to be outside of our natural, adaptive mourning response that we get to sorrow-inducing situations, Pettibone says. Most primary care doctors can be the first line of contact, as they are well trained to spot the difference and manage non-complicated major depressive disorder, he says.

Since depression symptoms vary by individual, Pettibone asks his patients how they are experiencing depression, so they can report whether they’re eating too much or too little, having sleep changes and so on. Things like showering and dressing can feel like monumental tasks, he says.

Underlying factors for the condition could include a biological predisposition for it, a conducive psychological makeup, or social aspects including stressors in work, relationships or medical issues that cause stress or disability, says Pettibone. Coronary artery disease, other cardiac illness, diabetes and a history of stroke can all contribute to the development of depression, he adds.

Another possible factor for depression could be Seasonal Affective Disorder, when a decrease in sunlight has an adverse effect on some people.

“We take all pieces of life into consideration” to treat depression, he says.

For friends and family, there are several ways to be helpful to someone with depression, according to McCutcheon.

“My primary recommendations to family are to be understanding, and to avoid invalidating or telling the patient to ‘get over it,’” he says. “At the same time, people with depression often need encouragement before they will engage in enjoyed activities.

“Offering gentle nudges from family can help be the catalyst to break depression’s vicious cycles,” he says.

McCutcheon advises rejecting the idea that you need to “fix” your loved one’s emotional pain.

“Simply being present with them and loving them is enough when they are in pain,” he says.

It helps to be mindful of anniversaries of losses, deaths or transitions, which can bring up symptoms, Pettibone adds.

If the sufferer feels confident enough to share that they have suicidal thoughts, the confidante should not worry that just talking about it with them will hasten a tragedy.

“Talking about suicidality often is a relief [for the sufferer], sharing something they may have kept hidden for so long,” he explains.

He advises taking the person to a safe, secure environment like an emergency room, UC’s psychiatric emergency department or the intake department at the Lindner Center if they share suicidal plans or intentions. The person can meet with physicians to receive walk-in assessments at those centers. Despite an initial hesitancy to come into a hospital, patients often at the end of a treatment are able to see that it wasn’t as bad as they thought it would be, Pettibone says.

If the person doesn’t want treatment or is imminent danger, Pettibone advises calling 911.