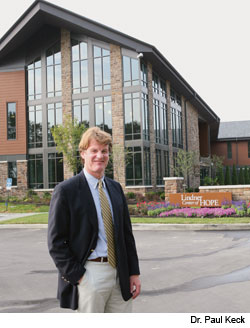 There simply are too many people who need help and not enough mental health professionals available to help them all, he says. A major part of the problem is that insurance companies reimburse mental health care providers only 50% of the actual cost of providing that care, he says. “If that’s not scandalous I don’t know what is,” says Keck.

Although people with mental illness cannot be discriminated against there is a reluctance of commercial and governmental insurance programs to pay for mental health care on par with other medical and surgical care, he says.

“So although there is parity in the sense that people with mental illness cannot be discriminated against by insurance carriers in that they have to have some kind of insurance the insurance is usually not very good,” says Keck.

The problem is not just specific to the Lindner Center of HOPE, he says. It affects all mental health providers in the region and the country who try to help people with mental illness, says Keck. “It cuts across the entire system.”

And because one in five Americans experience mental illness each year—more than twice the rate of cancer, heart disease and diabetes combined—the problem is magnified.

“If this were a form of cancer that were affecting one in five people would there be discrimination about paying for cancer treatment?” Kecks asks. “Would there be an attempt to ignore how big the public health problem was? No.”

He says mental illnesses are being ignored to the detriment of people with these neurologic brain diseases, including contributing to their early death and substantial suffering.

Access to mental health care is the reason the Lindner Center of HOPE, the dream of Francis and Craig Lindner, was created 11 years ago, Keck says. “They recognized there was a vast unmet need … for people with mental illness,” he says.

The Lindners wanted to do something about providing more access to care for mental health patients because there are simply too few providers. “They stepped up in the most definitive way by saying they wanted to open a center and fund it,” says Keck.

The Lindner Center of HOPE has helped plenty of people since the facility opened. “Over 40,000 people have gotten care here in the 11 years that we’ve been open,” he says. “And that really represents our attempt to alleviate suffering and save lives. And I think we really have.”

The Lindner Center of HOPE can accommodate up to 32 people in the hospital at any one time and up to 32 people in its residential care program. “We try to help about 100 people a month who call for outpatient care,” says Keck. “And we have a number of other services in addition to those but those are the primary ways that people ultimately access care.”

Even though the Lindner Center of HOPE has helped 40,000 people since it was founded in 2008 there’s still a huge need for more mental health care providers, says Keck. “We’re not pulling people away, stealing patients from any other health care system,” he says. “We’re just providing some capacity for the general community need, which is overwhelming.”

The reason there aren’t enough providers for mental health care is a circular argument, Keck says. Many, if not most, of today’s medical students graduate with significant student debt—at least $100,000 or more, he says. And that debt plays a huge role in ultimately determining which career path that medical students takes, Keck says.

And because reimbursement for psychiatry is among the lowest of all medical specialties the percentage of medical students going into psychiatry is dwindling, which perpetuates the problem of not enough providers of mental health care, he says. “Until supply meets demand we’re going to be struggling.”

“We’ve been really lucky and some of our researchers have been lead investigators—designed the actual clinical trials that led to FDA approval—for half a dozen medicines for people with depression, bipolar disorder and eating disorders,” says Keck. “I think that speaks to the intellectual contribution of the clinician scientists here.”

Many of those discoveries have been made in partnership with other health care providers such as UC Health, Cincinnati Children’s Hospital Medical Center and the Mayo Clinic. “We are all about collaboration and trying to utilize synergy when we can out of common interest in helping people with mental illness.”

In order to help more people with mental illness contributions and donations to the Lindner Center of HOPE are vital, says Keck. Gifts from local philanthropists Linda and Harry Fath, along with the Lindners, have been crucial, but more financial assistance is needed.

“[The Lindner Center of HOPE] is a phenomenal community resource and I hope people will support it for themselves and for their neighbors and friends and family,” says Keck.