Ken and Gloria Riley first opened the doors of J. Austin’s Riverbank Cafe three years ago and the couple plans to keep them open for many years to come.

The restaurant, named after the Rileys’ son James Austin, is located on the corner of Main Street and North B Street. The corner lot housed the former Riverbank Café, which closed in 2013 after six years in business and several awards. Owner Dennis Kurlas confirmed the sudden closure saying the decision was a personal issue as well as a business one.

Ken says, “I used to drive by the building all the time and I was intrigued by the location. I set something up and did a tour and I fell in love with it.”

After renovations to the building and working out all the fine details, J. Austin’s Riverbank Cafe held a soft opening in September of 2014 and officially opened its doors in 2015. The cafe’s southern-inspired menu features feel-good dishes like the smoked pork barbecue sandwich, which is slow-smoked pulled-pork topped with slaw and onion straws on a brioche bun, and the short ribs, which is fork-tender boneless short ribs served with mashed potatoes and green beans.

However, the most popular menu item is the bourbon-glazed meatloaf, which “isn’t the most sexy menu item but it does pretty well,” says Ken. The homemade meatloaf is topped with onion straws served with mashed potatoes and green beans. The menu also features soups, salads and what the restaurant calls “shareable” dishes for a lighter meal option. On Saturdays and Sundays the cafe offers a brunch menu complete with specialty drinks like mimosas, sangria and bloody marys. 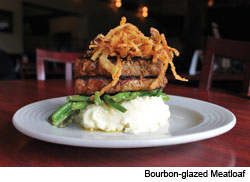 Ken says the restaurant is preparing for the summer by unveiling new menu items. The list isn’t yet finalized, however, Ken says people can expect to see new salad options.

Downtown Hamilton has been a center of revitalization efforts after many storefront were left empty.

While the restaurant business is always risky, Ken says, “We are in it for the long haul. We’re kind of unique to Hamilton. We’re not your traditional place. We’re chef driven. All of the things on the menu are our own recipes.”