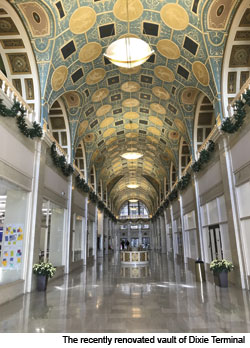 The recently renovated Dixie Terminal connected suburban Northern Kentucky to the cityDan Hurley In late November, American Financial Group completed a major renovation of the three-story Arcade in the Dixie Terminal Building at Fourth and Walnut, one of the great public rooms in the region. Restoring the massive blue and gold vault, which stretches 225’ by 35’ above the arcade, was the focus of this recent effort.

Having worked for three years on the other end of the block at the Cincinnati USA Regional Chamber, I walked past the building numerous times every week. Very few of my colleagues paid any attention to the Dixie Terminal, most had never ventured inside and few had any idea of the origin of its name.

Having grown up in the 1950s in Park Hills, Ky., the Dixie Terminal holds a powerful place in my imagination. We could see the Cincinnati skyline from our house, but psychologically the city was far away, someplace we rarely ventured.

With both Coppin’s and Eilerman’s Department Stores in downtown Covington, my mother rarely took us to Cincinnati to shop. When she did, we caught the No. 4 bus at the end of our street and traveled through Covington, across the Suspension Bridge and straight into the second level bowels of the Dixie Terminal. (Buses—and streetcars before 1949—from Kenton County entered on the second floor. Buses and streetcars from Campbell County entered on the Third Street level.) I can still smell the bluish exhaust as it swirled through the turnaround.

My most important memories come from late grade school when the Cinerama movies came to the Albee Theater, and I was old enough to go to downtown Cincinnati by myself. Walking up the wide marble staircase to the main floor drew my eyes upwards to the elaborate blue and cream vault arching over the main floor. The grand stairwell and vast dome became the portal through which a suburban kid caught a glimpse of the potential of urban life.

Because St. Xavier High School moved from downtown on Sycamore to Finneytown (the other end of nowhere) the year I was scheduled to start, I did not follow my father’s high school path and pass through the Dixie Terminal every day for four years, gradually encountering the diversity, dynamism and rhythms of city life. As it turned out, I settled into a suburban Northern Kentucky existence and the city center receded in my consciousness until my final years at Xavier University.

After WWI, when the first rumblings of urban revitalization stirred, Jack Linch, an attorney for the Covington and Cincinnati Bridge Company (popularly known as the Suspension Bridge) proposed the idea of a terminal for Northern Kentucky streetcars in downtown Cincinnati. Investors led by Charles P. Taft commissioned the architectural firm of Garber & Woodward to plan a Renaissance Revival building at the center of Fourth Street, the primary center of banking, professional firms and retail activity in the city.

When the nine-story mixed-use building opened in October 1921, it provided more square footage of prime office space than any other building in Cincinnati. The building filled up quickly. Small retail shops like Klosterman’s Dixie Bakery and the Dixie Terminal Food Shop filled the concourse. Coffee shops, ladies apparel shops and a bookstore lined the arcade. Dozens of railroad company ticket offices, the newly expanded Taft, Stettinius and Hollister Law Firm, insurance companies and even the Cincinnati Baseball Company offices located in the Terminal tower by 1928.

One of the most important, though not widely remembered, tenants was the Cincinnati Stock Exchange. The CSE, which first opened in March 1885, moved to the second floor of the Dixie Terminal immediately after it opened.

For many years the CSE was a relatively quiet, dignified operation dominated by the largest trading firms in the city. After WWII, trading activity grew significantly with 590,000 shares of 115 issues traded in 1950.

The CSE resisted that path of a merger with a larger exchange in a bigger city and did something that revolutionized stock trading. Led by Nick Niehoff, the CSE pioneered computer trading. In 1976 the CSE figured out how computers could automatically accept and match buy and sell orders for stocks from all over the country, making this a national market. By the early 1990s, the system transformed trading on all exchanges and the Chicago Options Exchange took over the CSE, which finally closed in 1995. Three years later the last TANK bus exited the Terminal and the ramps from the Suspension Bridge came down.

Today, the Dixie Terminal is an office building with a revitalized grand entrance. If you have never been there, visit. And when you do, walk up the great marble stairwell and imagine how that vista provided suburban kids from Northern Kentucky with a vision of a great city.