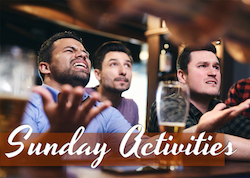 Kevin Michell Football season can be fun, especially at first. But after some weeks pass, rooting for your team often becomes more of an exercise in depressive routine than an enjoyable autumnal ritual.
You may have reached that point already—and who could blame you? If so, perhaps you’ll find one of these Sunday daytime diversions to be a more pleasurable use of your afternoons.

Cincy Brew Bus tours
You know what helps to erase the memory of soul-crushing losses and lost seasons? Beer! Cincy Brew Bus tours run throughout the week, but Sunday afternoons feature a hop around town that stop at three different greater Cincinnati breweries. The brew stops rotate each week so you can visit favorites and discover new ones.

Head to a farmers’ market
Whereas tailgating and watching football can be a sodium-laden and stressful experience, try substituting it with the relaxation of fresh produce and local goods sold at a nearby farmers’ market. Sunday mornings feature open-air markets in Mariemont, Hyde Park, Finneytown and even downtown’s Smale Park.

Revisit one of our museums
A common lament of tortured fandom is that a team keeps breaking your heart and yet you still come back for more. Break the cycle with an edifying and intellectually stimulating trip to one of Cincinnati’s incredible museums. The Cincinnati Museum Center at Union Terminal, Taft Museum of Art and Cincinnati Art Museum are all open on Sundays or try mixing it up with a visit to the American Sign Museum or the German Heritage Museum!

Spend a day downtown
While some Sundays bring thousands to the western end of The Banks, there’s plenty more to discover far from the madding crowd. Take a stroll through the heart of the city and discover new favorites among the shops and eateries between downtown and Over-the-Rhine.