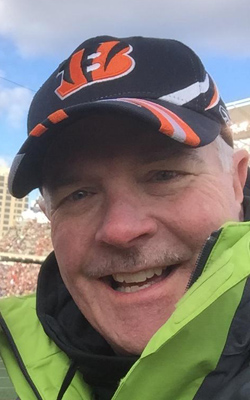 President and CEO of the Cincinnati Freestore FoodbankLiz Engel What do the Rubber Duck Regatta and Kurt Reiber have in common? Both have been staples at the Cincinnati Freestore Foodbank for decades. The former, a race of yellow rubber ducks down the Ohio River, will mark its 26th iteration this Labor Day weekend, although whether that swim will continue in its typical fashion is still unclear. Just chalk it up as another challenge for the latter. Reiber, a former senior vice president at Key Bank, has logged nearly as many years at the Freestore. After a 14-year stint on the board of directors, he’s on the heels of his ninth anniversary as its president and CEO.

During these uncertain times, Reiber has continued to lead the charge against hunger, even as a wave of nationwide layoffs sent exponentially more families his way. The organization is on pace to distribute 52 million pounds of food over the next 52 weeks, nearly double its normal amount. While that’s the nonprofit’s bread and butter, of course, there’s tons more going on behind the scenes.

Tell us about the Freestore. What are some of your best-kept secrets?

When I started on the board, what I liked most about the Freestore was that it wasn’t just about giving out food. It’s providing supportive services to these families. We’re trying to change the outcome. We have a culinary training program called Cincinnati COOKS! We’ve graduated over 3,000 students and 85% are getting jobs in the industry. [In 2017], we started LIFT The TriState, which is a 10-week logistics training program. With companies like Amazon, Wayfair, DHL and UPS and Verst in our metro area, there’s so much demand. We’ve had nine classes graduate so far. And we’ve had 100% placement from those students in the logistics area.

How has the pandemic shifted your operations? What kind of impact will it have on your projections for this year?

One thing we’re very proud of is the fact that, during this pandemic, we continued to maintain our benefits call center. Our caseworkers are meeting with folks via Zoom, via Skype, over the phone. Those individuals are getting signed up for SNAP benefits. They’re getting signed up for Medicaid. We can help them sign up for unemployment. We’re not going to “food bank” our way out of this pandemic. We can leverage those resources for families.

We’re also advocating for a 15% increase in SNAP benefits. I didn’t realize when I left banking that there’d be so much advocacy work to be done. That’s something that’s really critical, because we really are a voice for the voiceless.

Your leap into the nonprofit sector has been called your second act. It follows a 28-year career at Key. What’s the long-term plan for you? Is this your “last act”?

When I turned 50, my kids gave me a book called Halftime by Bob Buford, and it talks about moving from success to significance. I told the board when I came on that I would like to be here for 15 years. After that, I don’t see myself just going on long walks on the beach. I can’t see myself ever not doing something that gives back to this community. It’s been so generous to me.