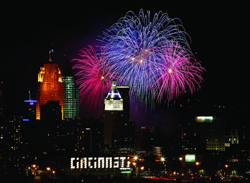 There are plenty of events happening this holiday weekend to keep the whole family entertainedCorinne Minard Fourth of July is this weekend, but many of the events we associate with the national holiday have been canceled. However, many communities and organizations have retooled their celebrations or created new ones so we can celebrate Independence Day safely.

Several local breweries are hosting daylong parties on the Fourth of July. Dead Low Brewing’s July 4th Red, White and Brews will feature socially distant fun along with food and drink specials while March First Brewing’s will be a party that takes over both taprooms, the patio and the parking lot.

Families can safely see fireworks in several locations in the Tristate. Lebanon is still hosting its annual Independence Day Fireworks July 3. Those who would like to watch are being asked to park at the Warren County Fairgrounds and then view the fireworks from their car. Fairfield’s Red, White & Kaboom Fireworks Display on July 3 will look different than previous years, with the viewing area increased so that the show can be seen throughout Fairfield. In Harrison, the 4th of July Celebration on July 4 will start with a parade (where viewers will be asked to remain socially distant from one another) and end with fireworks at dusk at the community center. Meanwhile, Kings Island season passholders can watch the park’s Fourth of July fireworks after a day of riding the attractions.

Those who typically attend a concert over Fourth of July weekend have a couple of socially distant options. The Warren County Fairgrounds Drive-In Concert July 3 will have the Kevin McCoy Band play while listeners enjoy the show from their car. The night will end with a fireworks show. If you’d prefer to stay home, you can watch Live from Music Hall: A Virtual 4th Concert from your home computer. The Cincinnati Pops, along with special guests Melina Doolittle and Over the Rhine, will be performing patriotic tunes from Music Hall.

Several communities will also be hosting parades July 4, though with some changes to help people stay safe. The City of Montgomery is having a Reverse Independence Day Parade, in which the parade participants will be stationed along a parade route and viewers drive by.

St. Paul Community United Methodist Church in Madeira is hosting its own 4th of July Drive-Thru Parade in its parking lot, and giving away a goodie bag to the first 300 children who come through. And Middletown’s Rolling 4th of July Parade has all participants stay in their vehicles for the entire route.

Looking for something else? There are plenty of other events this weekend, including the Middletown Progressive Picnic Dinner July 3, in which participants get to try food and drink from several Middletown restaurants; the July 4th Spectacular at Florence Speedway July 4, where you’ll get to watch racing and a fireworks show; and The Boom! at Berachah Church in Middletown July 3, which will have fireworks and skydivers.